Skip to content
316 shares
Jump to Recipe Jump to Video

Have you ever had a jam that was made from meat? Me neither. This is the reason why Gordon Ramsay’s bacon jam toast recipe intrigued me. I was like, bacon jam! What? His recipe includes unique ingredients too. 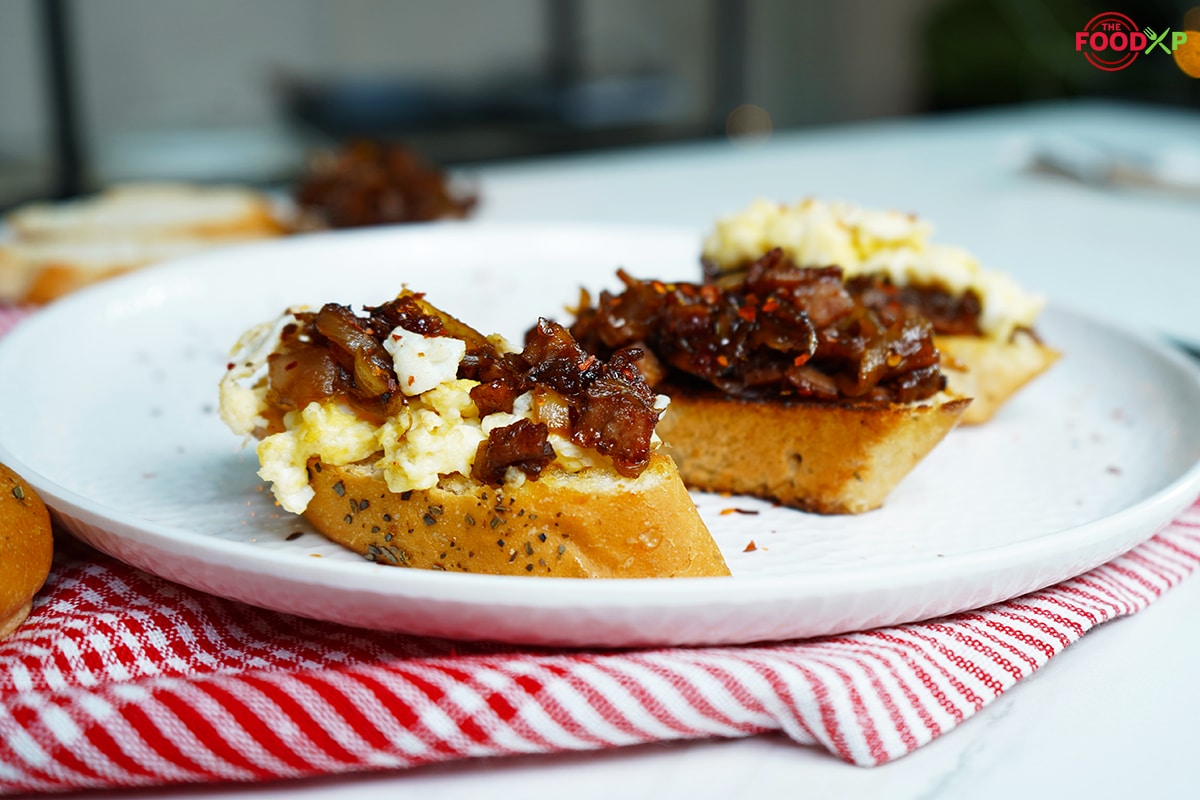 You’ll find freshly brewed coffee and maple syrup on the list, along with brown sugar and red pepper flakes. If this didn’t surprise you, then add shallots and onions to the mix as well.

What caught me off guard the most was how all these flavors that you least expect to blend go together so well. The pinch of red pepper flakes adds the right amount of hot notes to the jam.

The coffee comes with its bitterness and the maple syrup and brown sugar are, of course, for the sweetness. The bacon adds a rich taste to the jam and is the star of the show.

The part I liked the most is that you can cook everything in bacon fat. This gives the jam the extra richness and flavor of the bacon. The recipe is also pretty simple.

What Is Bacon Jam?

Bacon jam is a spread made with a combination of sweet and savory flavors. An amazing jam that is surely a bacon lover’s dream is here to satiate your taste buds and sweet tooth. It

It can be paired well with appetizers, grilled meats, and a lot of other dishes. So without further ado, bring your fantasy fare out by making delicious Gordon Ramsay bacon jam in no time.

How Does Gordon Ramsay Caramelize Bacon?

Heat the olive oil and cook the bacon chunks until they turn golden brown and the fat is released. Let a spoonful of fat remain in the pan and remove the cooked bacon. Ramsay then prepares the jam sauce with onions, shallots, butter, brown sugar, salt, pepper, maple syrup, coffee, and bacon fat.

What Are The Important Tips For Making Gordon Ramsay Bacon Jam Toast?

Follow the below important tips while you make Gordon Rmasya bacon jam toast.

What Equipment Will You Need To Make Gordon Ramsay Bacon Jam Toast?

How Much Time Will You Need To Make Gordon Ramsay Bacon Jam Toast?

What Ingredients Will You Need To Make Gordon Ramsay Bacon Jam Toast?

Start by adding the bacon to the skillet and cook until the fat is removed and the bacon is cooked through brown and crispy. Take out the bacon and set it aside. Drain the fat only by keeping a tablespoon in the skillet.

Then, add the shallots and onions to the skillet and cook them on low heat until they caramelize.

When the onions are caramelized, add maple syrup, brown sugar, coffee, and apple cider vinegar. Cook it on low heat for about 10 minutes. Further, add the cooked bacon chunks and let it combine evenly.

When the jam is thick and looks brown, remove the skillet from heat. Toast the bread in butter and serve the jam over the toast.

How Will Gordon Ramsay Bacon Jam Toast Recipe Look And Taste Like?

Once the jam is cooked, it will look brownish and chunky. If you want a smoother consistency, you can also blend the mixture. When it comes to taste, the jam has a strong flavor of bacon and is mostly sweet. But you’ll find consistent savory, bitter, as well as hot notes in a jam. The buttery toast is the best companion to this breakfast delight.

How Do You Know When Bacon Jam Is Done?

Simmer the bacon jam until you achieve brick-brown color and thickened the consistency. You need to cook the bacon jam over low heat for about 1 or 2 hours to achieve a perfect blend of flavors.

Homemade Gordon Ramsay bacon jam toast can be safely refrigerated for up to two to four weeks. Make sure to store the bacon jam in any airtight container.

What Can You Pair Up With Gordon Ramsay Bacon Jam?

This multipurpose bacon jam is a flavor explosion that also goes well with the starters and appetizers. Check out the suggestions below if you need a little nudge.

Can Bacon Jam Be Frozen?

Yes, the bacon jam can be refrigerated for up to 2-4 weeks. You can freeze it for longer but I would recommend not having it for more than a month. Whenever you wish to use just thaw it in the refrigerator before serving. If it is hard to spread, you can also reheat the jam in the microwave for a few seconds. 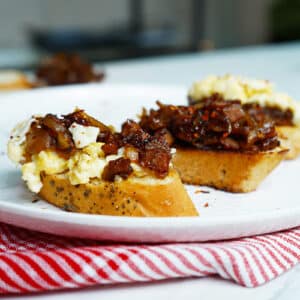 Gordon Ramsay's bacon jam toast recipe is a great and different way to have bacon. The bacon jam is delicious and is without the fat from the bacon. Serve it with toasted bread and scrambled eggs.
No ratings yet
Print Recipe Pin Recipe Save Saved!
Prep Time 15 mins
Cook Time 2 hrs 45 mins
Total Time 3 hrs
Course Chef’s Delight
Cuisine American
Servings 6
Calories 126.9 kcal

How do you make toast with jam?

The toast needs to be spread liberally with butter, but the jam should be a 1-2mm screed across the top.

What is the healthiest toping options to put on toast?

The healthiest topping options that goes well with bacon and jam toast is avocado, bananas, berries, and nutty butter.

How do you make bacon taste better?

To make bacon taste better, brush uncooked bacon slices with a slurry of balsamic vinegar, maple syrup, brown sugar, or honey. This will bring out the best flavors to the bacon.

What does jam on toast mean?

Additional comment actions. Besides the literal meaning, as an expression, “jam on toast” means the best, top of the range etc..

Grab your apron and get ready to prepare Gordon Ramsay bacon and jam toast. Find all the details in the above article and let us know how it goes in the comment section below.