Starbucks is the perfect place all over the world to get a morning caffeine hit; I think we can all agree with that. But, along with serving some of the best coffee ever, Starbucks is also very well known for serving delicious breakfast treats and baked goods! So, for Halloween this year, if you happen to be in Japan, you surely cannot miss out on their Spooky Purple Frappuccino! 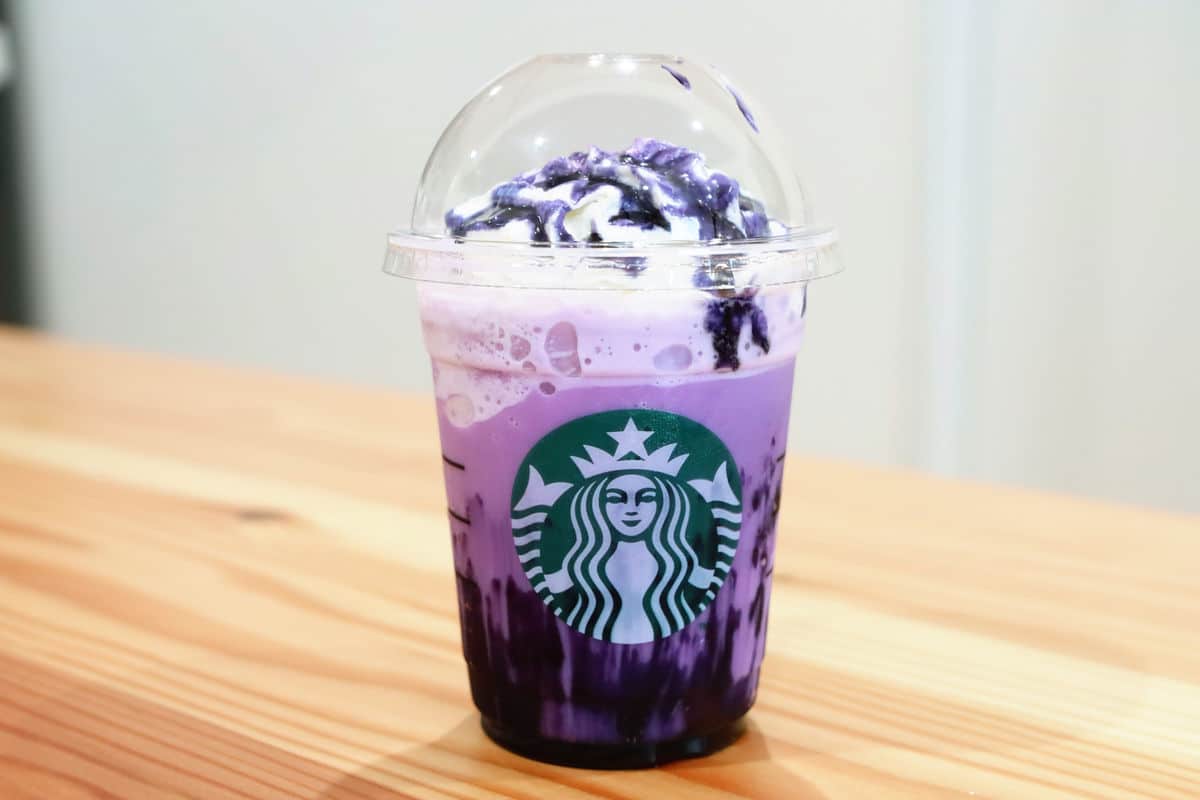 The frappuccino is a purple drink, so I am sure that some of you might be wondering what even goes about in it when it comes to flavors. Well, if the sweet potato was your guess, then you are actually right! The other menu option will also surprise you when it comes to flavors! So, let us take a look at all that goes around in these newly launched menu items at Starbucks Japan!

What Are The Flavors Of The Purple Frappuccino And Halloween Cake Launched At Starbucks Japan?

Keeping spooky colors aside, eventually, it comes down to one thing when we want to try something new, which is obviously the flavor. As I already mentioned earlier, the purple frappuccino is sweet potato based, and the cake is raspberry based in terms of flavor. But is that it?

The Purple Frappuccino from Starbucks Japan is made with Murasaki Imo, which is a type of sweet potato. You may confuse it with Ube due to the vibrant purple color, but actually, they are both a little different from each other. However, you can expect a sweet flavor with notes of vanilla and caramel out of this frappuccino.

Further, the frappuccino is topped with purple sweet potato powder and vanilla sauce, which enhance the flavor even better. Talk about the Halloween cake; there is really nothing unexpected about the flavors here! The cake is a decadent chocolate cupcake, topped with purple frosting and raspberry filling in the center, which oozes out.

What Is The Availability And Cost Of The New Options Launched At Starbucks Japan?

Certain holiday drinks are truly remarkable, so it can be a bummer to know that they are available only for a limited time. The same is the case with the newly launched Halloween options at Starbucks Japan, as, sadly, they will be available in stores just for a holiday.

Has Starbucks Japan Launched Anything Other Than The Purple Options For Halloween?

If a drink with sweet potato is not something that you are particularly interested in, I am sure that you are probably wondering if there is anything else worth indulging in at Starbucks Japan on Halloween. Well, there is good news, as they will be launching other drink options, too, for Thanksgiving!

Along with the Purple frappuccino and Halloween cake, Starbucks has also introduced some other specials for a holiday. These include mango passionfruit pulp frappuccino with citrus pulp and whipped cream, along with a matcha cream frappuccino.

What is the base flavor of the purple Halloween frappuccino from Starbucks Japan?

The base flavor of the purple Halloween frappuccino is that of Murasaki IMO, a purple sweet potato with a vanilla-like flavor.

When will the purple frappuccino be available at Starbucks Japan?

The purple frappuccino at Starbucks Japan will be available from October 19th until October 31st.

Will the newly launched Halloween drinks and desserts be available at all Starbucks Japan locations?

Yes, the newly launched Halloween drinks and desserts will be available at all Starbucks Japan locations.