Goat meat is one of the most flavorful meats available. However, not many people have tried this meat yet. Are you one of them? If you are, you are in the right place because, in this article, I’m going to tell you what goat taste like. 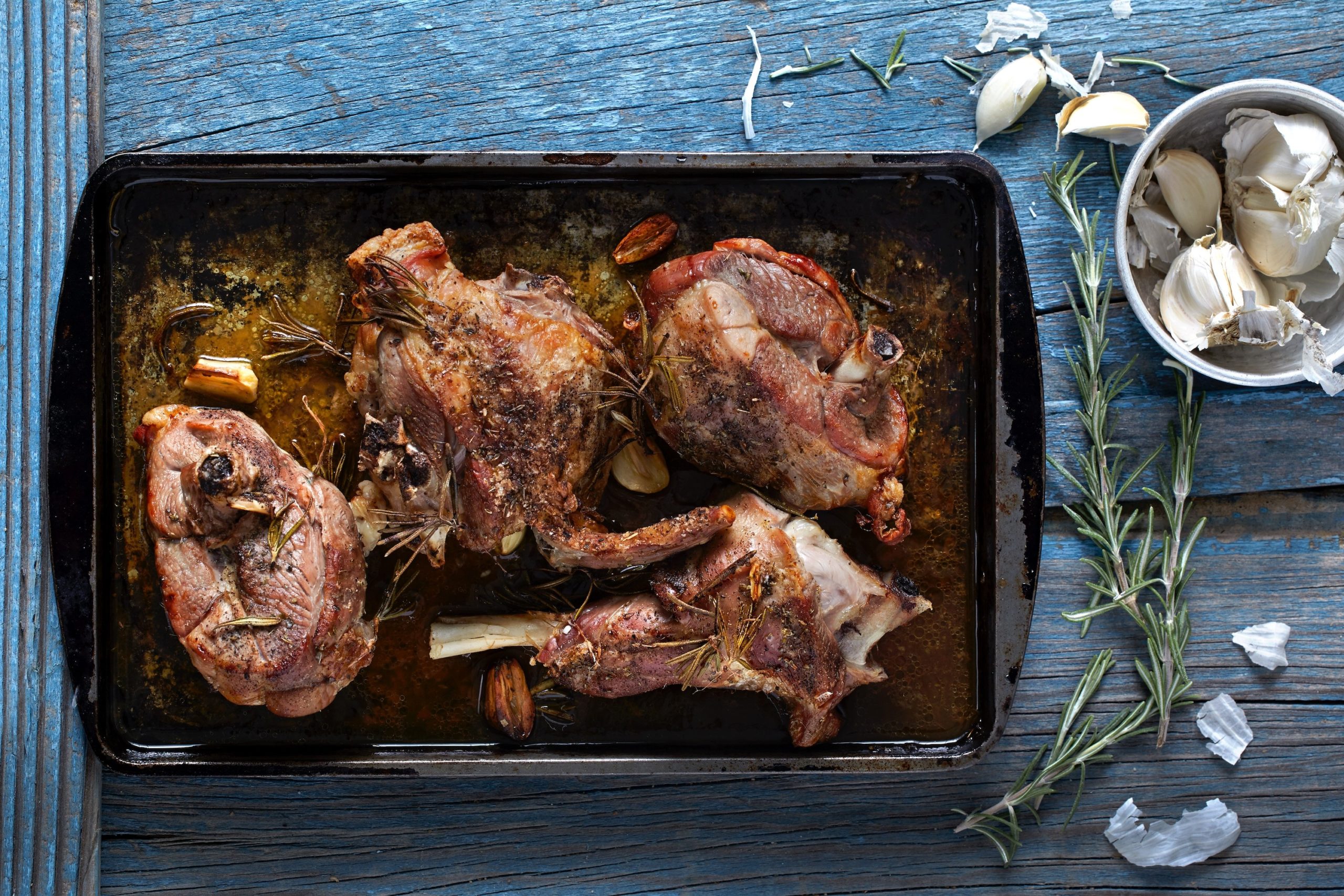 Goat meat has a strong meaty taste. It is considered to be gamey because of its strong taste. It is soft and tender in texture. We could say that goat taste like venison meat to an extent.

Goat meat is somewhat underrated. It can be used for cooking a wide variety of dishes, including steaks and burgers. Goat meat has a very pronounced meat flavor. Hence if you are someone who likes meat taste, you are going to love goat meat.

Trying a new dish isn’t easy, especially when it’s a meat item. You might have a lot of doubts in your mind regarding its taste, health benefits, and much more. I read your mind and have included all the answers to your questions.

What Is Goat Meat?

Most of you might already know what a goat is. But even then, we have to be considerate to those who might not be familiar with goats.

Scientific goat fact: Goats are mammals belonging to the Bovidae family. There are over 3000 goat breeds, and they are one of the earliest animals that humans have kept. They are widely used for their milk and meat.

Goats are widely seen all over the world. However, sometimes people confuse them with sheep. Even though goat meat isn’t common in Us, it is quite common in some Asian countries like India and Pakistan.

Since goat meat is a kind of farm-fed meat, it gets often compared to that beef. However, both goat meat and beef are very different. Goat meat has a particular taste of its own.

Goat meat has a bold taste to it. It has an earthy flavor to it with a mildly sweet undertone. Unlike beef and chicken, goat meat has a grassy aroma. The tenderness of the meat heavily depends upon the age of the goat. Younger the goat, tender its meat.

Goat meat, however, is not for everyone. Some people can’t stand its smell and taste when they love it. How goat meat is cooked also plays a great role in its flavor. Hence, if you try it for the first time, make sure to get it from a good restaurant.

Since goat meat isn’t as popular as beef or chicken doesn’t mean it’s bad. Goat meat is as good or much more flavorful than beef and chicken. It is tender, juicy, and melts in your mouth when it’s rightly cooked.

Goat meat has a slightly earthy flavor with a light sweetness to it. Hence, if you love the meaty flavor in your dish, then you’re missing out on a great dish by not trying some goat meat.

As we all know goat is a domestic animal, and gaminess is what we often associate with a wild animal. Hence when people say their goat meat tastes gamey may sound unrealistic.

But goat meat does have a gamey taste to it. It has dark red meat with a greasy aroma to it. The gaminess in goat meat comes from the that goats, even after being farm fed, have most of their food through grazing.

Even though they are kept in a small area, they prefer to eat the green grass rather than the normal farm food. Hence their meat will have a more intense organic taste than a farm-fed cow or buffalo.

But if you are someone who detests the gamey flavor, don’t skip the goat meat. Because only the older goat will have a strong gaminess, the young goat meat has a considerably less gamey taste and can be tried by all.

Goat meat has a unique taste of its own. It is slightly sweet with a dense flavor. However, regardless of being distinct, it shares some commonalities with other meats.

Goat meat is often compared to sheep’s meat and lamb meat. Most people mistook all of these as one. However, that’s not true at all. All of these are very different and have a distinct flavor.

Lamb Vs. Goat: Which Tastes Better?

For the longest period, I thought lamb and goat were the same. But sooner, I realized I understood how they’re too different from each other. The same applies to their meat as well.

Lamb meat, as well as goat meat, are highly flavorful and delicious. Both taste good and are loved by people all across the world. However, lamb meat has a more gamey flavor when compared to that of goat.

Lamb meat has a very bold flavor to it. It tastes much like meat with a strong odor. These smells come from the fat present in the lamb meat. On the other hand, goat meat has a milder and more sweet taste when compared to lamb.

Hence goat meat will be something that all can eat. Moreover, goat meat has more nutritional content and less fat in it. If you are a lover of gaminess, then you can go for both, and if you have a gamey taste, leave lamb meat!

Both goats and deer are grass-eating cute, looking animals. But does that mean they also taste alike? Deer meat, popularly known as venison meat, has a similar flavor to that of goat meat.

Both deer, as well as goat meat, have an earthy and gamey flavor to them. But deer meat is lean compared to goat and has less fat content. Deer meat is healthier than that goat meat.

Deer meat has a less gamey flavor and is more nutritionally dense than goat meat. When made into a curry, both of them taste alike. However, goat meat is much tastier than deer meat.

Beef has a less meaty taste and is generally softer in texture. However, goat meat’s texture and gaminess greatly depend on its age. The young goat has soft meat with a light gamey flavor that resembles beef.

Pork meat has a good amount of fat in it. Hence it tends to be sweeter and softer than that goat meat. However, when it comes to nutritional content, goat meat is way more nutritional and has fewer calories when compared to pork.

Curry goat is a famous dish that belongs to Jamaica. Curry goat has been in traditional Jamaican cuisine for a long time. It is curry, made of goat meat with lots of spices, and is extremely flavorful.

It uses thyme, turmeric, chili pepper, and cumin as the main spice blend. These are cooked with tomatoes before they get added to the goat meat. The goat meat used for these curries is pan-seared at high temperatures until its juice starts oozing.

Then the meat is mixed with all the spices and some ingredients and is slow cooked until they obtain a thick gravy consistency. Caribbean goat curries taste so good and have the potential to make you a big fan of goat meat.

Just like goat meat, goat cheese also has a very distinctive flavor. Goat cheese is actually one of the most popular cheeses among the worldwide cheese lover. Goat cheese has a soft, tart flavor to it.

Goat cheese has a tangy flavor to it with an earthy aroma. The intensity of tartness will be higher with the young goat cheese. The young cheese will also have a creamier consistency.

On the other hand, the aged goat cheese has a very mild tart flavor and a more crumble texture. Goat cheese isn’t just tasty but also healthy. It has very low-fat content and is considered one of the healthiest cheeses, along with being a tasty one.

Goat milk is sweeter than most milk and has an earthy taste. Goat milk also has a goat-like aroma to it. This is one thing that helps us to recognize goat milk from the rest of the milk, if not the taste.

However, the taste of goat milk varies from one breed to the other. Nigerian dwarf is a goat breed that is famous for its sweet and creamy milk, whereas Saanens milk is more watery and bland.

We have talked about goat meat, its milk, and cheese. But are you familiar with goat butter? Goat butter might not be a household name, but it is tasty to try out!

Goat butter is white and has a sweet taste and tangy undertone. Compared to cow’s butter, it has a low melting point; hence it is extremely creamy and performs as an excellent spread.

You can use goat butter just like any normal butter; just be cautious of its low melting point.

The taste of meat depends on the food the animal eats and the physical activities the animals are involved in. Hence normal goat meat tastes very different from that of a mountain goat.

The mountain goat has lean meat and a stronger, gamey taste than normal farm-fed goats. It is much thicker and has a rough texture than normal goat meat.

What Do Different Cuts of Goat Meat Taste Like?

Things To Look For While Buying Goat Meat

How To Preserve Goat Meat

Like much other meat, goat meat should be preserved in the right way to prevent deterioration. The best way to preserve goat meat, as you would expect, is to refrigerate it.

Goat meat is flavorful on its own. It can be cooked in a multitude of ways to bring the best taste.

We all love tasty food, don’t we? But sometimes we must stop eating tasty food because it isn’t healthy. But that’s not the case with goat meat. Along with being tasty, goat meat is one of the healthy options we have.

After reading about its taste and health benefits, you might think about goat meat in your daily diet. If you are, I have a little more information about its nutritional benefits. I have made it in a tabular form for you to take a gaze at it whenever needed.

I’m so happy that you are here with me till the end of this article. Goat meat has a gamey taste to it with a hint of sweetness. It has a distinctive earthy odor to it that adds to the taste of the goat meat.

Goat meat isn’t something that everyone likes. But the only way you could find whether you like it is to eat it. If you are trying it for the first try, start with young goat meat. I hope you’ll like it.

What is goat meat called in the USA?

In the USA, goat meat is often referred to as chevon.

Which is healthier goat meat or beef?

Goat meat has higher iron content and less fat in it. Hence it is way healthier than beef.

Which is tastier; goat or lamb?

Goat has less meat and a gamey taste. Hence goat meat is tastier than lamb meat.

What is the best way to cook a goat?

The best way to cook goat meat is to cook it slowly with fewer spices and amble salt.