The vegetable tagine recipe is an easy and delicious recipe to make at home. It’s a perfect way to use lots of different vegetables. The tagine was originally a Berber dish and evolved as an excellent meal to make the most of tough cuts of meat while cooking over an open fire. 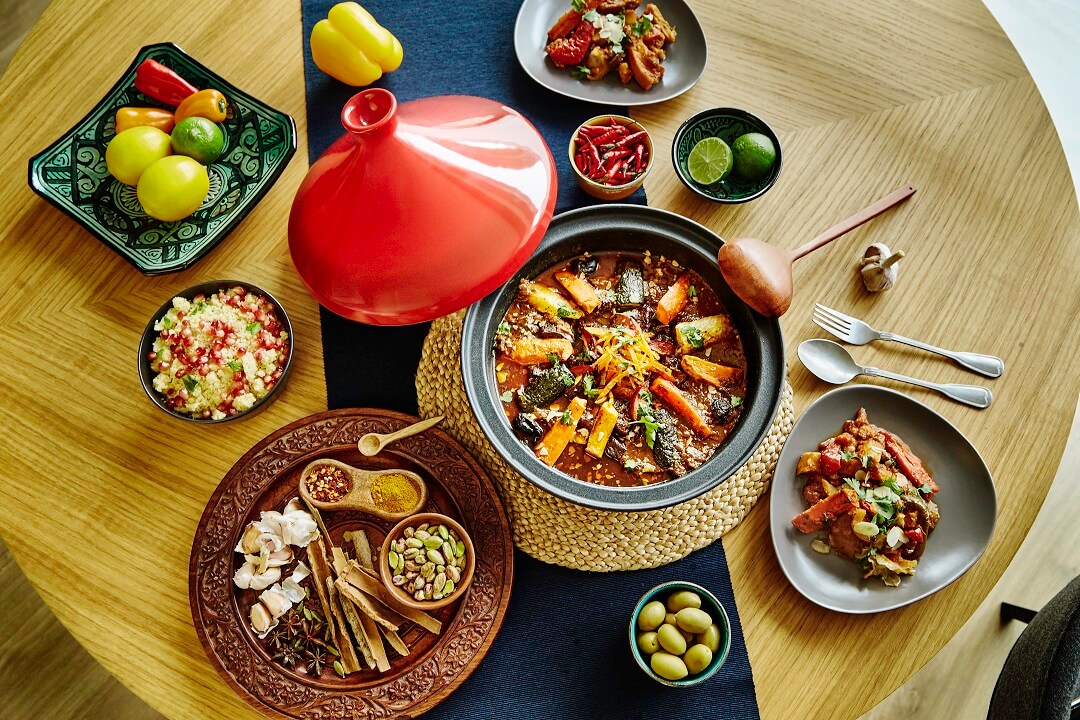 The key to an excellent vegetable tagine is the spices and tagine pot. The conical lid traps steam as the dish cooks, so the heat is evenly distributed throughout. A portable oven, in other words, that bastes your food, thereby keeping in moisture and flavor.

To make vegetable tagine, heat oil in the tagine pot. Cook shallots, garlic, vegetables, and spices in it. Then, add broth, tomato juice, and lemon to it. Cook them on low heat for half an hour. After that, add chickpeas and prunes to it. Let them cook until everything is tender. Season it with salt and pepper and stir in the kale. Your vegetable tagine is ready!

You can also use nigella seeds or its substitutes in this recipe. This is just an overview of the recipe. Find the complete recipe below. There are other main course recipes on our blog as well that you should also check.

1. Stewed Mushrooms– I love to have stew, both vegetarian as well as non-vegetarian. When opting for a vegetarian stew, a mushroom stew is what I love the most. It is thick and delicious. It is also really easy to make.

2. Chicken Potato Stew– Chicken potato stew is the ultimate comfort food. It combines delicious chicken and crispy golden skin with baby potatoes and refreshing herbs and turns it all into a one-pot meal. It is fulfilling and delicious.

3. Tex-Mex Summer Squash Casserole– Yellow squash has a mild flavor, but in this recipe, squash’s flavor gets enhanced by flavorful chiles, jalapenos, and red onions. If you do not want to spice up the dish, then you can use diced green chiles instead of jalapenos. Can I put a tagine in the oven as well as on the stove?

If you don’t have an open fire, you can use your tagine either in the oven or on the stove. Both methods work equally well.

I have a gas stove. Can I still use a tagine pot?

If your tagine is cast iron, then yes, you can use it on a gas stove.
If you are using a clay tagine (this is the traditional type), you’ll need to use a heat diffuser so that the tagine doesn’t crack. Begin with the temperature on low, and increase it very gradually.

Are tagine pots difficult to clean?

What other vegetables can I put in a vegan tagine?

When making the perfect vegetable tagine, you want to use vegetables that have different flavors and especially textures. So, for example, if you are using harder vegetables such as squash or potatoes, you also want to include softer veggies such as sweet peppers, peas, and eggplant.

What other dishes can you make with leftover tagine?

Here are some ideas for you:
– Breakfast or lunch pastry. Using your tagine pot, top your leftover tagine with buttered phyllo pastry and bake for 20 minutes at 400 degrees F (you can put the whole tagine pot in the oven)
– Quick wraps: Fill a tortilla or a wrap with a scoop of tagine, and top with a fried egg (optional), or some hummus. A meal in minutes!
– Tagine ‘pizza’: Drizzle some leftover Moroccan bread, pitta bread, or flatbread with olive oil. Spread some tagine on top, and put slices of mozzarella over the vegetables. Bake at 400 degrees F for 7 minutes or till the cheese melts. Lunch is served!

There you have it! Enjoy your vegan Moroccan tagine!