As a baking lover, you must have smelled a sweet and delighting fragrance of vanilla. Whether we talk about cream cakes, muffins, pudding, pies, or any other sweet recipe – vanilla essence is as important as anything else. It is said that vanilla and baking go hand to hand, and you cannot separate one from the other. 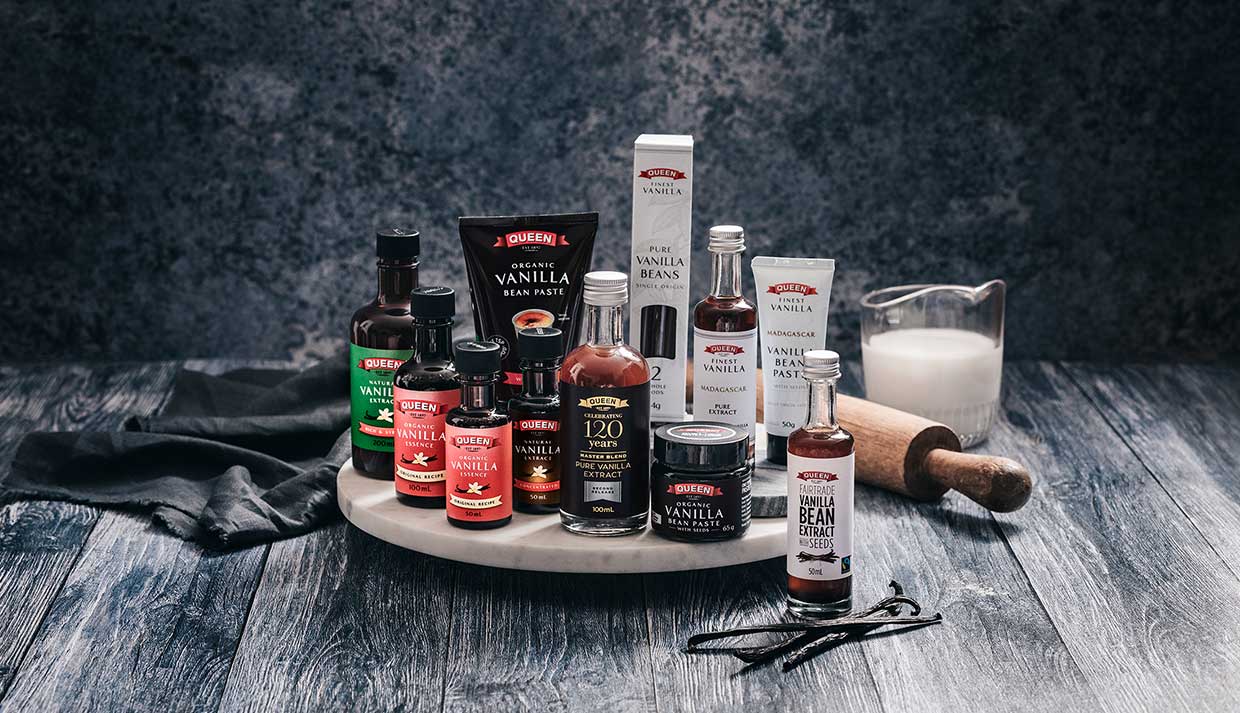 Vanilla is used in baking just for increasing flavor, but the sweet smell is another reason it has such a significant role in baking. There are various vanilla essence and vanilla extract brands, and the taste of your recipe or dish depends on the brand of vanilla you have used. If you want a recipe or dish of the highest quality – we recommend buying vanilla from a top-notch brand.

All baked sweet treats like cake, ice-cream, glaze, pudding, icing, etc., need a fine bottle of vanilla essence to increase both taste and flavor. The use of a high-quality vanilla essence ensures the perfect aroma, flavor, and texture of your recipe.

Here are some of the finest and most delicious recipe that uses vanilla essence:

At first, you need to preheat your oven to 180°. Beat both sugar and eggs until you get a lemon color mixture. After that, melt the butter, and add it to the wet mixture. Mix the flour, soda, and salt into the mixture, and start beating again. Pour the mixture into the oven, and let it heat until you get a brown pudding. Take a pot, and melt all the ingredients for the sauce, and stir well. It can be served with vanilla ice-cream to make an impression.

This is one of the finest recipes you can produce that has vanilla essence. This recipe is so popular that meringues are light, so you can get cookies with a crispy interior. You just need to have eggs, vanilla essence, and cream of tartar. Simply place eggs in a bowl and let them stand for around 30 minutes at room temperature.

After that, add vanilla, cream of tartar, and salt to the egg’s whites. Before doing this, the oven has to preheat at 250°. Start beating the mixture until you get a foamy feel. After getting a foamy appearance, add sugar to it, and make the sugar dissolve in it by beating at a higher speed. Let those cookies bake for around 40-45 minutes, and then remove them from the oven.

This recipe is not only known for its deliciousness but also for its unique name too. It is thought that the recipe was first served in a bottle that was a bit like a monkey with a long tail. The ingredients you need to prepare this dish are milk, sugar, whole cloves, strong brewed coffee, vanilla essence, and cinnamon sticks.

Take a large saucepan and combine milk, sugar, cinnamon, and cloves. Once the ingredients are combined, you need to boil the mixture. After boiling, let it cool down to room temperature. Discard spices and strain the mixture into a large pitcher. Then stir pisco, coffee, and vanilla. Once it is done, cover the recipe and refrigerate it until chilled. It’s best to serve this ridiculously tasty recipe over ice.

It’s one of the recipes that are perfect for holiday seasons. The magic ingredient of this recipe is cider because the longer it simmers – the better the taste. You need to have simple ingredients for this recipe that are apple cider or juice, brown sugar, cinnamon sticks, orange slices, whole cloves, vanilla extract, and thawed orange juice concentrate.

As far as the preparation is concerned, it’s a bit like Chilean monkey tail punch. Take a large saucepan and combine brown sugar, orange juice, apple cider, and salt. After that, on a double thickness of cheesecloth, place sticks of cinnamon and cloves. To enclose seasoning, gather all corners of cloth, and tie with a string. Boil it, discard spices, stir in vanilla, and serve with orange slices. You’ll love each and every bit of this recipe.

The best thing about this recipe is that it can be prepared anywhere and equally popular in all the regions. Whether you need a recipe for a child or an adult – mini chocolate chip sandwich cookies are the best you’ve got. This recipe’s required ingredients are cream shortening, eggs, sugar, baking soda, vanilla essence, salt, all-purpose flour, and vanilla beans for filling.

To prepare this recipe, the oven has to be preheated to 350°. Mix cream shortening and sugar until they become light and fluffy. Once it is done, start beating eggs and vanilla. Take another bowl, and add whish flour, baking soda, and salt in it. Then gradually beat them into the mixture, and stir chocolate chips in. The dough has to be chilled for about an hour. For filling purposes, make sure you split vanilla beans lengthwise. And add white eggs, granulated sugar, and vanilla essence.

Until the sugar is dissolved, whisk the mixture constantly. Egg white mixture has to whisk at high speed. Add butter into it, and keep on beating after every addition. The mixture has to be beaten until it becomes smooth. After that, the filling should be transferred into a reusable pastry bag. Use air-tight containers for storage purposes.

It’s a traditional southern staple that can serve as a delicious recipe after having a meal. To prepare this recipe, you need to have packed brown sugar, cup sugar, sweet potatoes, melted butter, vanilla extract, salt, cornstarch, cold water, and fresh parsley.

Take a small bowl, and use it to combine sugars. You will need a slow cooker too for this recipe, so you can layer a third of sweet potatoes and sprinkle with a third of the sugar mixture. The layers have to be repeated twice. Once it is done, take another bowl, and combine butter, vanilla, and salt. The mixture should be drizzled over potatoes to get the desired taste. Sweet potatoes have to be tendered, and for that purpose, cover and cook for 5-6 hours.

Potatoes should be transferred to a serving dish with the help of a slotted spoon. Once the potatoes are transferred, cooking juice needs to be poured into a saucepan to let it boil. Now is the time to mix water and cornstarch and cook them until thickened. Parsley can also be sprinkled if desired.

Vanilla is an important ingredient for dishes like cakes, cookies, pastries, muffins, and puddings. No matter how delicious a recipe is, the smell and texture of vanilla essence are the winners for most consumers. From cakes to cookies and muffins to puddings – no dish can be completed without a slight addition of vanilla essence.