SPAM, which stands for ‘Spiced Ham’, is one of the most popular brands of canned meat in the United States. With SPAM, it can go either way, some people don’t prefer it as much, but the ones who do, love it! So, keeping up with the coming holiday season, they have launched a new Figgy Pudding flavor! 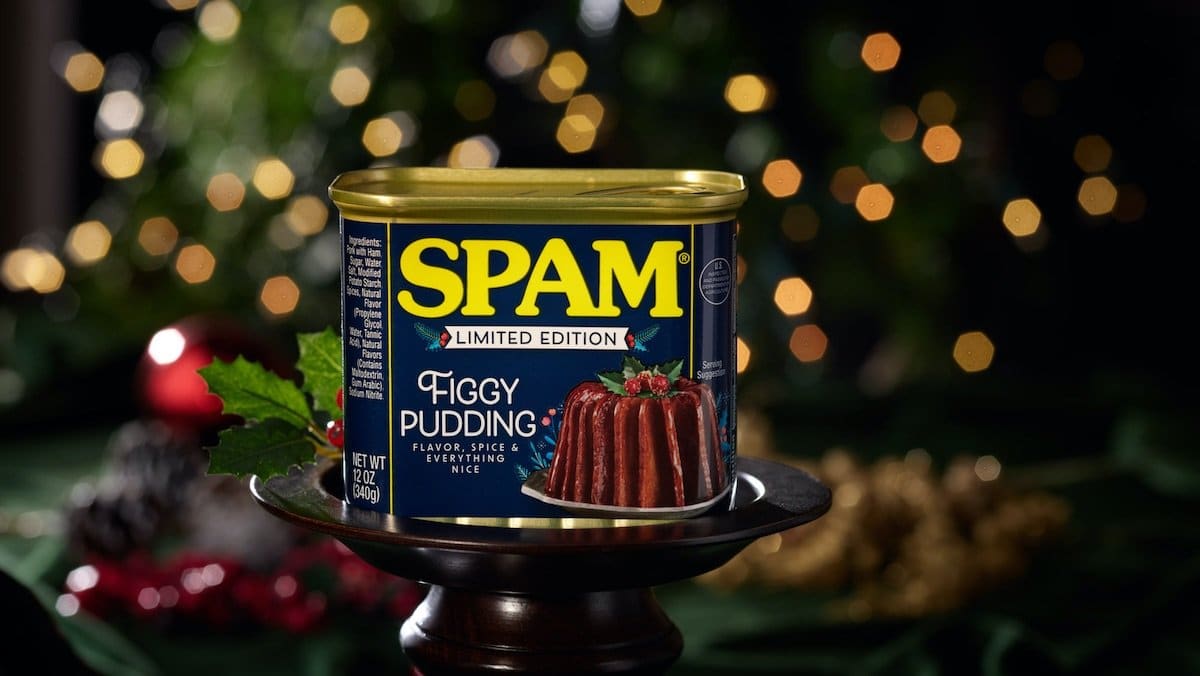 Almost all food brands, especially around holidays like Christmas, want to keep up with the newest trends of flavors appropriate for that time. If all the restaurant chains and coffee shops can launch holiday specials, why would SPAM want to be left behind?

Earlier, the company also launched some great holiday specials that people loved. So they are quite confident about this one too! But what is this new flavor all about, and when can you get your hands on one of these? For that, make sure you read this article until the end to know every detail!

What Is A Figgy Pudding Flavor?

Figgy pudding is one of those British desserts that aren’t as famous everywhere in the world. But, for people who love it, they truly cannot think of enjoying anything else on Christmas! But a sweet pudding-flavored canned meat? How does that even work, and how did SPAM even come up with such an innovative flavor?!

For that, let us take a look at what figgy pudding is actually made of! Figgy pudding is a rich pudding enjoyed during Christmas time, made with flour, figs, dry fruits, and suet (yes, you read that right). Yes, suet is hard-saturated animal fat, mostly beef, used for cooking quite often. So, that gives the figgy pudding a balanced sweet and savory flavor.

This is where the connection between meat and the figgy pudding comes from; hence, it was easy for the SPAM company to come up with this holiday flavor. As described by the company itself, “The variety features cinnamon, nutmeg, ginger, allspice, and cloves, along with popular winter flavor profiles like fig and orange flavors.”

The company also added in its statement, “A savory, sweet and comforting treat, Spam Figgy Pudding evokes a sense of nostalgia and warmth, taking consumers back to their favorite memories from past holidays.” They have mentioned that the figgy pudding-flavored SPAM can be served on a charcuterie board alongside spiced Dutch baby pancakes and skewers.

Where And When Will The SPAM Limited Edition Figgy Pudding Can Be Available?

Now that you know what the flavor of this pudding is all about, I am sure that many of you probably cannot wait to try it out! So, the real question here is where and when can you get one of these? Well, the good news is that the Figgy Pudding flavored SPAM is already available in the market!

You do need to hurry to get one of these, though, as the last time SPAM released a holiday flavor, pumpkin spice, back in 2019, it sold out in 7 hours! You can get one of these online, on SPAM.com, Amazon.com, and Walmart.com, while the supplies last. As far as cost goes, each purchase consists of two cans of this Figgy Pudding flavored SPAM, each weighing 12 ounces. The retail price announced for this pack of two cans is $ 10.

The SPAM brand has launched a new limited edition holiday flavor, a take on the classic British dessert, Figgy Pudding. This pudding combines sweet and savory flavors with the perfect balance of various spices, which will surely make you nostalgic! This limited edition flavor is already available in the market, on SPAM.com, Amazon.com, and Walmart.com, with a retail price of $ 10.

What does the figgy pudding-flavored SPAM consist of?

As per the company’s statement, the figgy pudding-flavored SPAM consists of cinnamon, nutmeg, ginger, allspice, and cloves, along with popular winter flavor profiles like fig and oranges.

Until when will the SPAM Figgy Pudding flavor be available?

The SPAM Figgy Pudding flavor will be available only until stocks last.

Can these cans be bought at a store?

As per reports, as of now, these new flavored cans of SPAM are only available online for purchase.

Can only one can be purchased at a time?

No, as per SPAM, each purchase will have a minimum quantity of two cans.

What is the price of this newly launched SPAM flavor?

The suggested price for this newly launched flavor, where one purchase consists of two cans, is $ 10.