Whenever I try to avoid eating food, my mother thrusts Potato Soup in front of me. Not only it is good for health, but it is a delicious meal as well. My mother is quite an expert in making Potato Soup. 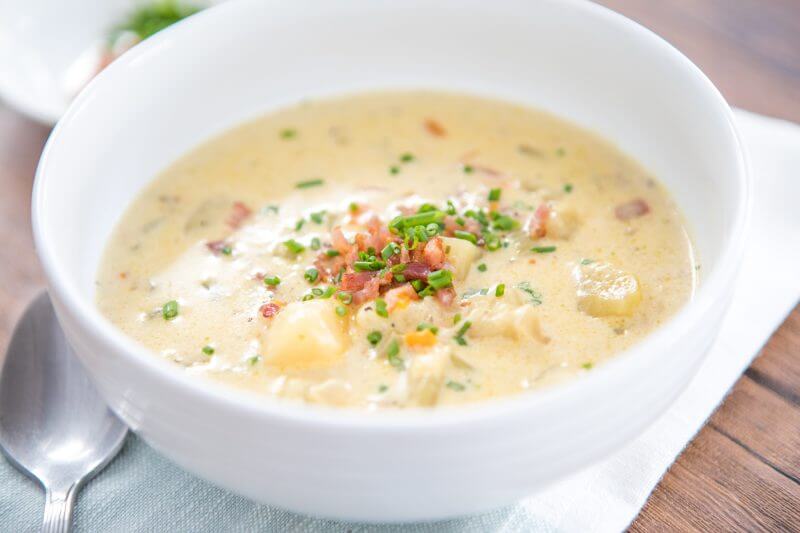 Moreover, she also taught me how to make Potato Soup recipe easily and without any help. Over a period of time, I too became an expert in making it. We make Potato Soup as a dinner every weekend. Still, it is my mother’s favourite as she uses it as a medium to put healthy things inside my stomach.

Potato is one of the major ingredients used in a variety of dishes. Potato soup is one of them. It is an amazing dish made with bacon, potatoes, milk, cheese, chicken broth and carrots as well. It can be made within half an hour and doesn’t require many efforts. It can be made easily in your homes.

So, in this article, I will guide you to the process of making Potato Soup. Check out the below mentioned Potato Soup Recipe and follow the directions to get a perfect soup. Also, there are other recipes that you can have as starters, let’s check them out.

1. Watercress Soup– Who doesn’t love to have soups in winter? Everyone right! And if it is healthy and leafy soup, then our cravings even increase more. One of my favorites is Watercress soup.

2. Hot Dog Soup– This soup recipe is full of healthy veggies that anyone can make at their home using these 7 easy ingredients.

3. Potato Leek Soup– This soup recipe is a french delight and has got its popularity worldwide due to its unique taste and ingredients used. Those golden potatoes, along with green leeks and chicken broth infused and cooked together, just make this soup more tempting.

4. Vegan Pumpkin Soup– This is a classic, easy pumpkin soup made with fresh pumpkin that is very fast to make. Thick, creamy and full of flavour, this is the pumpkin soup recipe you will make now and forever.

How to Make Potato Soup at Home | Video