Topped with vanilla glaze, Paula Deen cinnamon rolls recipe is an instant hit. These rolls are extra soft, buttery, and fluffy and have a delicious cinnamon swirl. The world is your cinnamon roll. Make this recipe on your own. Find the details below. 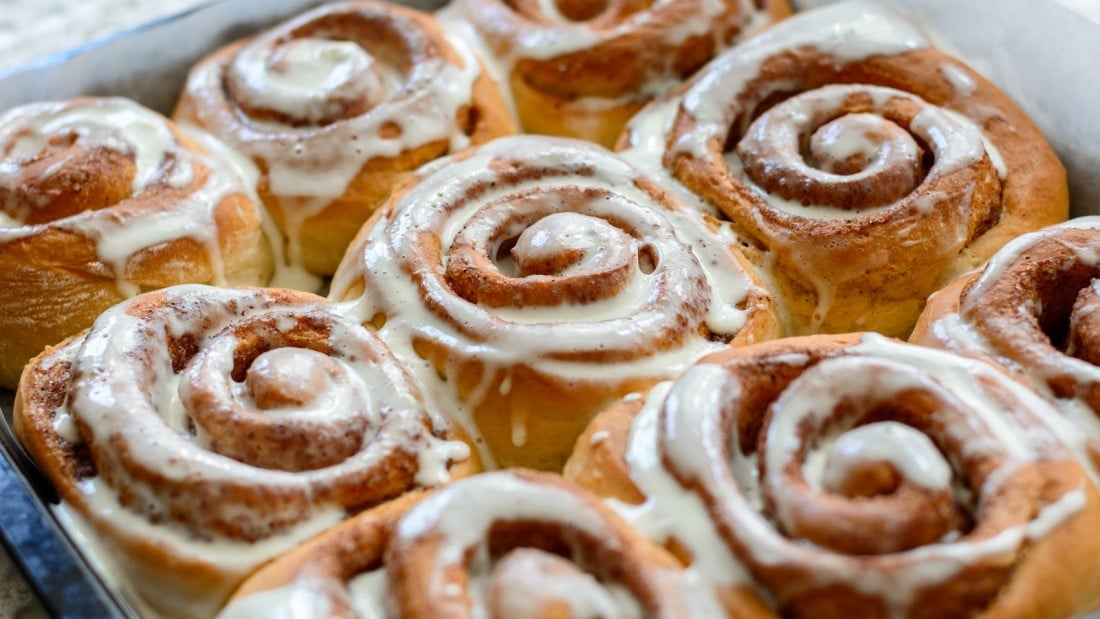 Paula Deen makes these rolls wonderfully. Make the spongy dough for the rolls, then roll it out on the surface.

Place rich toppings and fold the roll to bake. Prepare a vanilla glazing and spread it on the cinnamon rolls once they are baked.

Here are some tips to make decadent cinnamon rolls. Use room-temperature eggs in recipes. They will make the dough rise quite well.

Moreover, you can use tangy cream cheese frosting instead of vanilla glaze. All in all the cinnamon roll recipe is a tempting and a crowd-pleaser dessert.

You can make cinnamon rolls in an instant by following these easy instructions. Note down the equipment you need and find the recipe’s nutritional information.

Other Paula Deen Recipes That You Can Try

What Equipment Will You Need To Make Paula Deen Cinnamon Rolls?

How Much Time Will You Need To Make Paula Deen Cinnamon Rolls?

What Ingredients Will You Need To Make Paula Deen Cinnamon Rolls?

Dissolve dry yeast with water in a bowl and keep it aside. Meanwhile, take a large bowl and mix warm milk, ¼ cup sugar, and ⅓ cup melted butter. Stir in eggs with yolks and season with some salt.

Add two cups of all-purpose flour and mix until you get a smooth consistency. Now add the yeast mixture to the same bowl and combine. Form a nice dough.

Sprinkle flour on a clean surface and place the dough on it. Knead the dough for five to ten minutes. Place the dough into the greased bowl covered with the cloth. Let it sit until it rises for two hours.

Once the dough is raised, again place it on a clean surface. Punch the dough down. Now roll out the dough into a 15*9 inch rectangle with a rolling pin. Now brush the dough with melted butter.

Mix powdered sugar and cinnamon in the bowl and sprinkle over the buttered dough. Now sprinkle walnuts, pecans, and raisins. From the beginning, roll the dough up and pinch the edges together to seal.

Cut the roll into fifteen slices.

Grease the baking pan with butter and sprinkle sugar. Place cinnamon roll slices in the pan and bake until doubled for twenty minutes at 350 degrees Fahrenheit.

Mix four tablespoons of butter with powdered sugar and vanilla extract in a bowl. Add hot water to the glazing to achieve the desired consistency.

How Will Paula Deen Cinnamon Rolls Look And Taste Like?

The walnuts and pecans add a nutty flavor to the cinnamon rolls. On top of that, the creamy vanilla glaze adds a nice layer of sweetened richness. 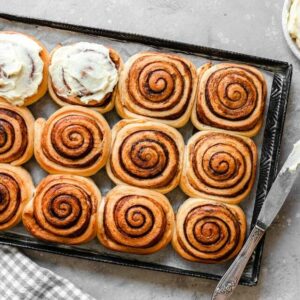 What is the difference between cinnamon rolls and cinnamon buns?

Cinnamon rolls are filled with pecans, walnuts, and raisins and baked to perfection. They are baked in a greased pan and glazed with vanilla icing. Cinnamon buns are flipped out of the pan upside down, creating a sweet crust on the top with a butter-sugar mixture. Moreover, cinnamon buns are glazed with tangy cream cheese frosting.

What is the inside of the cinnamon roll made of?

The cinnamon roll is a rich dough containing walnuts, raisins, and pecans. It is then glazed with cinnamon, butter, sugar, and vanilla extract.

Cinnamon rolls are usually served warm. If you have leftover cinnamon rolls, store them in an airtight container once cold. Before serving, please place them in the microwave for 15 to thirty seconds and enjoy.

What is the best flour used for cinnamon rolls?

Use bread flour for the cinnamon rolls.

What makes a cinnamon roll dry?