A cup of homemade pudding helps you reminisce about childhood memories. This Paula Deen banana pudding recipe will remind you of one of them. If you need a spoonful of a satisfying dessert, grab a bowl of banana pudding!

Layer bananas and cookies in the casserole and pour this mixture. Refrigerate for two hours. The decadent and lip-smacking Paula Deen’s banana pudding comes together in a snap.

Making a flavorful banana pudding needs some chef tips. Use riper bananas to get all-infused flavor bananas. Also, do not let the banana turn brown. Brush them with lime juice.

Ready to make eye-catching banana pudding? Quickly note down the recipe steps, and ready your equipment to whip up this classic Paula Deen banana pudding recipe. Let me know how it went!

Other Paula Deen Recipes That You Can Try

What Equipment Will You Need To Make Paula Deen Banana Pudding?

How Much Time Will You Need To Make Paula Deen Banana Pudding?

What Ingredients Will You Need To Make Paula Deen Banana Pudding?

Take a bowl and combine milk and pudding mix. Blend well with a mixer. In another bowl, combine cream cheese and condensed milk. Whisk well.

2. Pour Everything Into The Casserole

Place cookies and bananas in layers into the casserole. Pour the creamed mixture we prepared earlier over the banana layer. Refrigerate for two hours. The banana pudding is ready.

How Will Paula Deen Banana Pudding Look And Taste Like?

Paula Deen banana pudding is all about a perfect dessert gift. Bananas become the centerpiece of the pudding with a lovely taste.

Above that, cookies bring a crusty layer into the pudding, and creamed layers add softness. The real essence of vanilla and banana captivates all your attention and satiates your sugar rush. 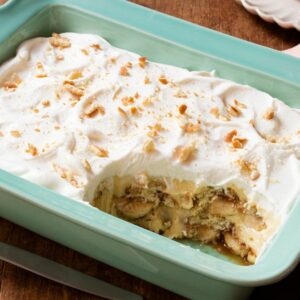 How do you keep bananas from turning brown in the pudding?

You can keep bananas from turning brown in the pudding by picking them at the peak of ripeness. When you buy them, they will be green and hard. They are also very sweet and take longer to ripen than other fruits. To speed up the process, store them in a cool, dry place for a few days after buying.

What are the best wafers to use for the banana pudding layer?

You can opt for vanilla biscuits, shortbread cookies, Bischoff cookies, or graham crackers for a fun twist to your banana pudding.

Why is my banana pudding runny?

Banana pudding is a delicious dessert, but it can be runny if you don’t follow the recipe. If you over-mix the pudding mix with milk, it can result in a runny pudding. It should be thick enough to add a layer to the bananas and cookies.

Can Banana Pudding be Frozen?

It can be frozen, but the texture won’t be the same as you want. The cookies will be mushy, and the bananas will turn dark. The best advice is not to freeze the pudding.

What are the different ways you can serve banana pudding?

There are some coolest ways you can serve banana pudding. Serve them in a banana peel, waffle cone, mason jar, party cups, wine glass, and tortilla boats.

Whether you prefer serving your banana pudding in a bowl or a waffle cone, this will be the star dessert at your parties. We have got this recipe right for all dessert lovers. The execution by chef Paula Deen is done right. You only need a bowl and fork to grab this in your hands!