NOS Energy Drink is a beverage that was launched by the Fuze Beverage company in February 2005. NOS stands for Nitrous Oxide Systems. 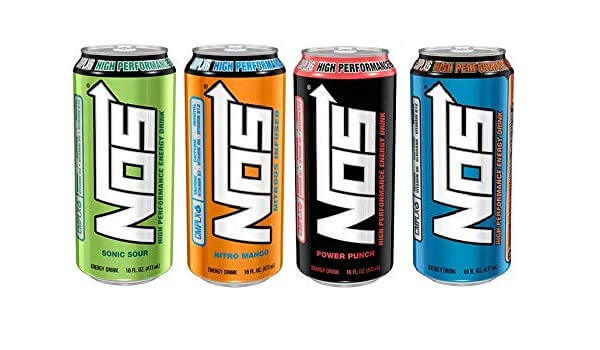 But in 2007, Fuze Beverage company was purchased by Coca Cola and due to that the NOS Energy distribution was licensed to Coca Cola. But on  June 12, 2012, Coca Cola announced that they will also distribute Monster Beverage. So, Nos Energy became a part of Monster Beverage Corporation and is still produced by Monster up to this day.

NOS has made a name for itself through motorsports advertisements. NASCAR driver Kyle Busch, Formula Drift driver Chris Forsberg, and rally car racer Riley Herbst are all part of Team NOS who promoted NOS on the big stage.

We’ll talk about all the flavors and their nutritional breakdown further in this article. But first, check out the latest NOS Energy prices.

There are six flavors of NOS Energy that are available in the market. Those six flavors are Original, Original Sugar-Free, GT Grape, Cherried Out, Charged Citrus, and Rowdy.

Now let’s check out the nutritional breakdown of all the NOS Energy flavors that I’ve mentioned above.