Today, I have picked a steak recipe and it is for the milk steak. Milk steak originated in America and became famous around the globe due to the uniqueness of its taste. It is a steak cooked in milk and is served with a thick milk sauce.

American cuisine has great taste and has become popular worldwide. American culture of eating is widely adapted and indulged by almost everyone around the world. Whether it’s their pancakes, hotdogs, puddings, or steak, American food is one of the most loved foods on this planet.

To make milk steak, coat steak with salt and pepper and set it aside for an hour. Coat the steak with a flour mixture. Then, dip it in the eggs and then in the flour again. Then, heat the lard in a skillet and cook the steak for 5 minutes from each side. Then, cook the flour in the same skillet. Add milk, salt, and pepper and cook it until it’s thick. Pour this sauce over the steak.

This is just an overview of the recipe. Find the complete recipe below. There are other main course recipes on our blog as well that you should also check.

1. Tuna Casserole– This recipe mainly comprises pasta, canned tuna, canned peas, and sometimes corn. This delicious recipe is going to be one of your favorite tuna recipes.

2. Huevos Con Chorizo– The name pretty much says it all: This is a simple breakfast dish of eggs scrambled with chorizo.

4. Veal Scallopini– Tender veal scaloppine dredged in flour and sauteed in butter gets a boost of brightness from a simple pan sauce made with white wine and a generous squeeze of lemon. 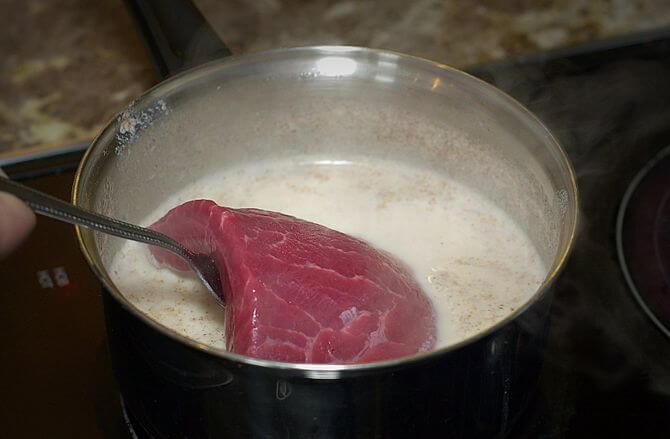 Milk steak originated in America and became famous around the globe due to the uniqueness of its taste. It is a steak cooked in milk and is served with a thick milk sauce.
5 from 1 vote
Print Recipe Pin Recipe Save Saved!
Prep Time 15 mins
Cook Time 20 mins
Total Time 35 mins
Course Main Course
Cuisine American
Servings 4
Calories 502 kcal