Away from the chaos and hullabaloo of the capital, in the luscious arena of the foothill of Himalayas, live the honey hunter tribes of Nepal. 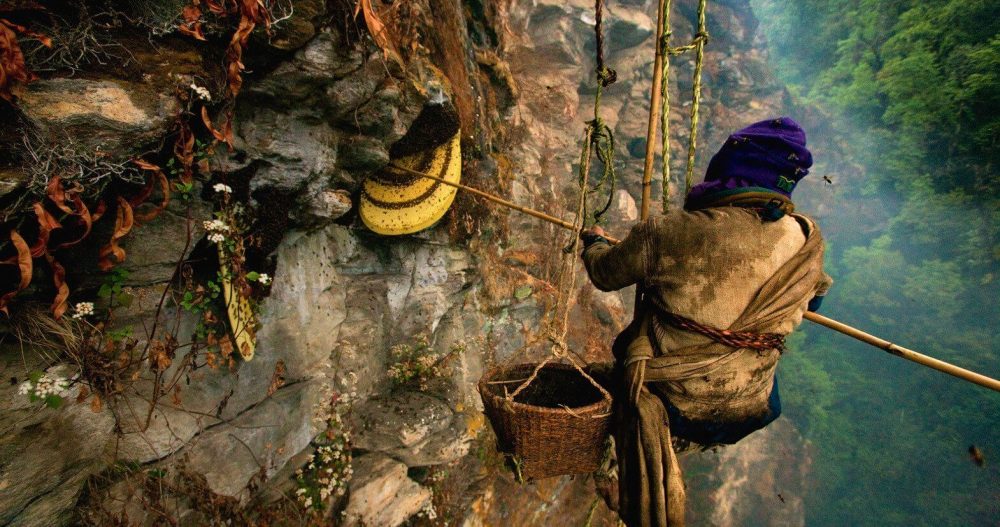 They are the sole experts in harvesting cliff honey, otherwise known as mad honey.

The cliff honey is popular among the locals and throughout the globe for its tremendous medicinal value, aphrodisiac, and hallucinogenic properties and thus named “Mad Honey.”

For a lot of the Gurung and Tamang tribes of Nepal, honey hunting is the major way to earn cash and provide the necessities for their family, which is one of the reasons that honey hunting is given so much importance.

Spring is the most foreseen and popular season to harvest the honey as the medicinal values are believed to be at a peak during the time of the year. The rush starts with early preparations.

It is the task of teamwork, and the only way the successful harvest can be achieved with a reduced chance of mishaps is when the task is done in the team.

The procedure that the hunters follow for the harvesting of the honey to this day is quite antiquated.

With no protective gears, safety nets, or protective harnesses, they venture to the steepest cliffs where the bees nest.

All the hunting team members gather and set out on the journey early in the morning. The long route to the destination is no piece of cake.

Narrow paths on the winding hills, somewhere slippery, and somewhere steep slopes only add the plight in the journey.

But hunters are experts in getting around the hurdles and obstacles like a pro with their jokes, wits, and experience sharing with the newcomers along the way.

The actual task of honey hunting starts with a puja, which is done by a shaman.

He offers the sacrifice of a cock to invoke the spirits of forest and cliffs and prays for their blessing, protection and ask to bestow good omen to them to avoid the occurrence of misfortunes and accidents.

The team takes the rest, eats their meal, and prepares themselves for the tedious task to follow.

The ladder is secured and dropped from the top of the clifftop all the way down to the bottom. The head honey hunter climbs the rope ladder and stays immobile in order not to alarm the honeybees. At the same time, the assistants remain at the bottom of the cliff to assist the headhunter with the directions, precautions.

Few hunters remain at the top of the cliff to collect the honey and wax that the headhunter detaches from the cliff.  According to almanac, beekeepers don’t take all the money from the hives. They only take the excess honey so the bees won’t starve over the winters.

The hunters light the fire at the bottom to make the aggressive honeybees flee the beehive and try to make them docile. In some attempts, the giant bees provoke and often bit the outsiders.

But locals have a good rapport with honeybees. Even though the hunter’s body is covered within 3 cm giant bees, they hardly bite them, If they are their friends.

After the assurance of safety from the honeybees, the head honey hunter carefully detaches the honeycomb from the cliff with the help of sharpened bamboo sticks and drops them on the basket, which is suspended from the top of the cliff and is then pulled upwards and filtered.

It takes a few hours to days’ long journey from cliffside to the nearest inhabitants, and Gurungs are goods with physics. They carry up to 60 KG of honey in a single convey.

However, this does not mark the end of the work. The filtered honey is brought to the storehouse, and then again, it goes under several processes of filtrations until the best quality of mad honey is assured.

Then what? Then the honey is transported to Kathmandu and to various parts of the globe pleasing every customer. Every year, the honey harvesting season attracts a lot of international and local tourists.

Honey hunting in Nepal is a raw, adventurous, thrilling, and once-in-a-lifetime experience for anyone. You not only get to witness the daring honey hunters getting their way up with the challenges, but you also get to surround yourself with the most humble and down to earth people, the lush of the green jungle, the smile of the Himalayas, the greeting of the ever-flowing rivers, the hide and seek of the cliffs.