Skip to content
355 shares
Jump to Recipe Jump to Video

Fish and Chips is one of the most popular breakfast items in the UK. Gordon Ramsay is a chef who makes the best fish and chips. I first tried this dish in Gordon Ramsay’s restaurant. It was so tasty! So, I thought of making the same fish and chips at my home and share this awesome recipe with you guys. I tried 4-5 times and eventually got the perfect recipe for you guys.

To make Gordon Ramsay’s fish and chips, coat the fish in the batter made from beer, flour, salt, baking soda, sugar and then, fry it. Chips are made by cutting potatoes into thin wedge-sized slices and then, frying them. At last, mushy peas are made by boiling peas and pulse them with cream, butter, salt and pepper.

Well, don’t worry if you are feeling confused about the recipe. This was just a short recipe; the complete detailed recipe is mentioned below. But before going to the complete recipe, let’s check out some other recipes by some famous chefs.

1. Gordon Ramsay’s Spaghetti Bolognese– This authentic spaghetti bolognese by Gordon Ramsay is one such recipe that no one would like to miss. It is a very famous recipe in Britain and isn’t actually an authentic Italian recipe. Nevertheless, it is delicious and definitely worth a try.

2. Gordon Ramsay’s Filet Mignon– Filet Mignon (sometimes known as Fillet Steak) is the tenderest cut of beef, known for its mild flavour and melt-in-the-mouth texture. And this recipe by Gordon Ramsay is something that you should definitely try. 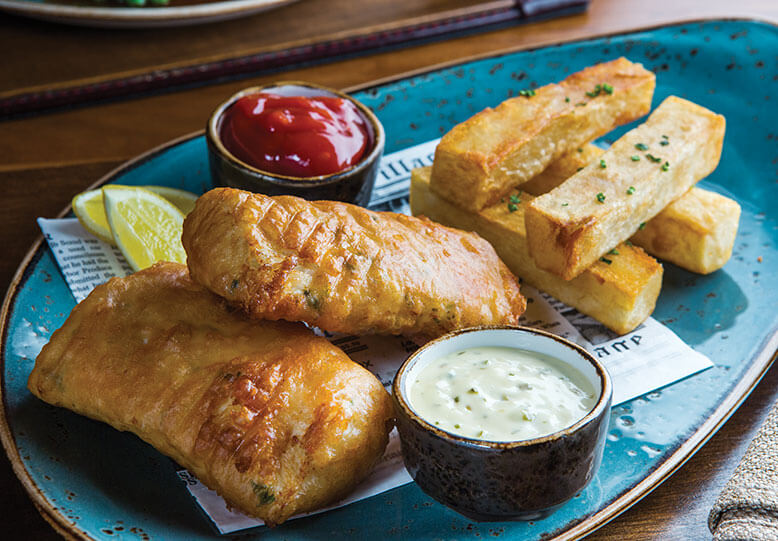 Gordon Ramsay is a brilliant chef. His recipe for fish and chips is one of the best and really famous. Today, I am going to share the recipe of Gordon Ramsay's fish and chips.
4 from 1 vote
Print Recipe Pin Recipe Save Saved!
Prep Time 10 mins
Cook Time 35 mins
Total Time 45 mins
Course Chef’s Delight
Cuisine American
Servings 5 People
Calories 660 kcal

For Fish and Chips

If you are a Gordon Ramsay fan, then do check out Gordon Ramsay’s Filet Mignon recipe. Do let us know your experiences in the comments below.