Skip to content
10 shares
Jump to Recipe Jump to Video

Funeral sandwiches are ham and cheese baked sandwiches. They are perfect to be served as an appetizer or as lunchtime or a breakfast meal. It is quite fun and simple to make. Anyone can make funeral sandwiches at home in just 20 minutes. Back in the time, it was a Southern funeral tradition to serve the attendants of the deceased with food and drinks. At that time, funeral sandwiches were a common sandwich and were often served with wine.

To make funeral sandwiches, cut bread rolls and place the bottom halves on a baking tray. On the bread rolls, lay ham and cheese slices. Cover with the top half of the bread rolls. Mix butter, Worcestershire, Dijon mustard, brown sugar, onion powder, garlic powder, and poppy seeds in a bowl.

Brush the butter sauce all over the buns and put them in the oven to bake for 20 minutes. The funeral sandwich will be ready in 20 minutes. You can also use prosciutto in your sandwiches. If you don’t have prosciutto, here is a list of prosciutto substitutes.

This was just a brief overview of the recipe. Find the notable list of equipment, ingredients, nutritional facts, and instructions in the article below. Before you proceed, check out some other sandwich recipes below.

1. Wagyu Zabuton Steak Sandwich– Wagyu beef is a kind of luxury beef and goes high in the food hierarchy. It is quite expensive and rare. If you lay hands on some, try to make a steak sandwich out of it.

2. Cheese Toastie– A cheese toastie is simply a toast with cheese and feels like a hug to the soul. These sandwiches are generally popular in the UK because they are easy to make and delicious in taste.

4. Peanut Butter Banana Oatmeal– It is said that breakfast is one of the most important meals of the meal. One such healthy breakfast recipe is the peanut butter banana oatmeal.

What Equipment Will You Need To Make Funeral Sandwich?

How Much Time Will You Need To Make Funeral Sandwich?

What Ingredients Will You Need To Make Funeral Sandwich?

1. Dress Up the Sandwich

Begin to dress up the sandwich with the fillings. First, slice the Hawaiian roll buns in between. Then, add ham sausages and swiss cheese to the bottom half of the bun. Cover it with the top bun. Moving forward, take a bowl, add butter, Worcestershire sauce, Dijon mustard, poppy seeds, onion powder, garlic powder, salt, and black pepper. Mix it well.

Smother the butter sauce on the roll buns using a basting brush. Place the rolls into the baking tray and put it in the oven to bake at 350 degrees Fahrenheit for 15 minutes. Remove the baking tray when the sandwich is cooked. Serve with your favorite dipping.

Funeral sandwiches are nothing to mourn about, instead, they are amazing and delectable ham sandwiches. It is filled with ham, swiss cheese, and flavorful butter sauce. The cheesy blend merged with ham sausage tastes delightful. Moreover, the butter sauce is filled with rich elements that bring out the umami flavors. 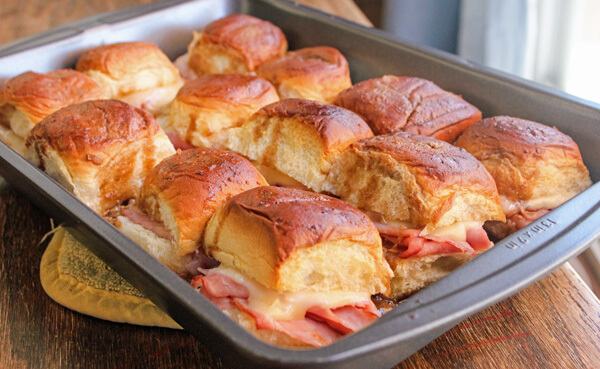 Funeral sandwiches are ham and cheese baked sandwiches. They are perfect to be served as an appetizer or as lunchtime or a breakfast meal. It is quite fun and simple to make. Anyone can make funeral sandwiches at home in just 20 minutes.
4.60 from 5 votes
Print Recipe Pin Recipe Save Saved!
Prep Time 5 mins
Cook Time 15 mins
Total Time 20 mins
Course Breakfast
Cuisine American
Servings 5 people
Calories 330 kcal

Can funeral sandwiches be frozen?

The funeral sandwich can be frozen, however, you can simply store the sandwich in an airtight box in a cool or dry place.

Why are they called funeral sandwiches?

What are funeral sandwiches made of?

How do you keep sliders warm?

You can keep sliders warm by wrapping them up in foil.

Refer to the above article and make this funeral sandwich in your kitchen. Share your cooking experience with us in the comment section below.

6 thoughts on “How To Make Funeral Sandwiches At Home”