When I say bacon, you’d imagine the fatty steaky ribbon of meat that makes for an amazing breakfast. But did you know that bacon, like the English language, is different in America and England? 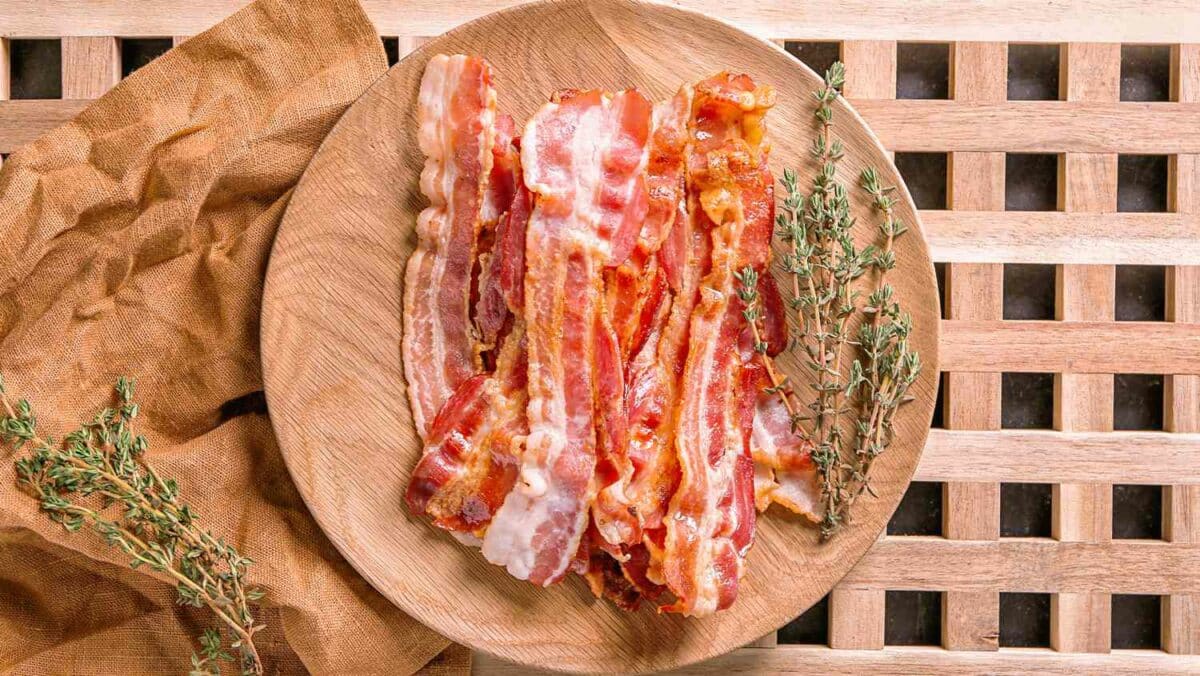 There are very prominent differences that separate the two. So, today’s debate is about English bacon vs. American bacon.

Be it America or England; you’ll find bacon on breakfast plates. But besides their name, these two have little in common. English bacon and American bacon differ in types of pig, appearance, fat content, type of meat, texture, and taste.

We’ll discuss all of this in detail. But before we get into the nit-and-grit of the article, let’s see a table to discuss the overall differences.

What Is English Bacon?

English bacon, also known as rashers, is a meaty type of bacon that doesn’t have much fat. It is cut from the back and loin portion of the pig.

English bacon is much leaner and has only a third of the fat of belly bacon. It is also known as back bacon, as it is a cut from the back.

English bacon is cured in brine and then dried, which gives it a more savory flavor. It is a staple breakfast in Britain and is a very important element of the full English breakfast. It also is an important part of the BLT sandwich.

What Is American Bacon?

American bacon is a cut from the fatty belly of the pig and thus is very fatty. It is flavored with spices and then smoked with hickory and corncobs, giving it a sweet, savory, and smoky taste.

American bacon is a thin strip of fatty meat that becomes oils and crunchy when fried. It is eaten as a staple breakfast paired with eggs and toast.

It also makes its way into many dishes like roasted chicken, burgers, sandwiches, and even pasta. American bacon is also known as belly bacon or streaky rashers.

Now that we have explored a few things about English and American bacon let’s see their differences in detail to understand them better.

At the time, this cut was introduced as cured pork and was loved by many. It was termed ‘bacon’ as it meant a special cut of meat in German and French dialects.

When Britain colonized America, they brought their pork products with them, so bacon was introduced to America in the 1600s.

Although as times changed, the leaner meat was discarded, and a more fatty cut was introduced. Thus, the belly bacon that we love and know came into being.

English bacon is a bit restrictive when it comes to pig breeds. It only comes from two breeds of pigs; Tamworth and Yorkshire.

But America was only introduced to the Tamworth breed. America also has the most bacon needs. Thus, they shifted to commercially raised breeds that gave them faster and still delicious results.

English bacon isn’t cured the same way American bacon. It is also leaner and thicker. Thus, English bacon has a savory, chewy, and meaty taste. Its taste is comparable to grilled deli meat. It has a soft and meaty texture.

On the other hand, American bacon is thin, lined with fat, and smoked. Therefore, it tastes savory, spicy, fatty, and rich. It also has a sweet taste to it that English bacon lacks. American bacon, being rich in fat, has an oily and crunchy texture.

English bacon is cut from the back or the loin of a pig. Thus, it is lean and only has some fat at the outline of the cut. As I mentioned, English bacon has an average fat content and only one-third of the fat of American bacon.

As everybody knows, American bacon is high in fat content as it is cut from the fatty part of the pork belly. You can see the fat streaks on the thin bacon strips.

English bacon isn’t as famous in pop culture as American bacon. Thus, the streaky and thin strips of American bacon are easily recognizable.

English bacon differs in appearance. It is thicker and isn’t served in strips. It also isn’t streaky. English bacon is usually round, oblong, or rectangular.

The types of cut make a lot of difference in appearance, taste, and textures of the two types of bacon and thus is a major difference.

English Bacon Vs. American Bacon | Which One Is Healthier?

This is kind of no brainer. I have stated multiple times that English bacon is much leaner than its American counterpart. If you look at it, American bacon is filled with lard and thus is heavy with fats and cholesterol.

English bacon actually contains meat and has an average fat content. The result is evident here. English bacon is healthier than American bacon as it contains more meat and less fat.

English Bacon Vs. American Bacon | Which One Is Tastier?

When discussing foods, it is a well-known fact: the fattier it is, the tastier it is. Yes, fat makes everything tasty. That is why so many people love the steaky fatty American bacon.

Honestly, it is solely a matter of preference. You’ll love English bacon if you prefer your bacon chewy and meaty. On the other hand, if you love fatty and crunchy bacon, American bacon is the one.

But let’s talk about popularity and consider people’s opinions. I have to say that American bacon is tastier than English bacon because of its rich, fatty, and smoky taste.

Here are some of the top recipes you can make with English bacon. You can make these recipes for breakfast, brunch, for a snack, or just for a whole meal.

Garlic bacon butty is a delicious and simple dish you can make with English bacon. You need to cook your bacon and then serve it with toasted bread that is covered in tomato chutney. Then, add garlic slices to it, and you’re done!

These crispy and savory sandwiches are a great breakfast. The fluffy bread, the meaty bacon, the garlic, and the tomato chutney make for amazing and flavorful snacks.

Then all you need to do is drop a scoop of batter in a hot pan with oil. Cook it on both sides, and you’ll have yourself herby and fluffy bacon hotcakes.

How would you like some delicious and savory pasties as a snack? Do try the pea and bacon pasties. All you need is some puff pastry and filling made with peas, bacon, cheese, eggs, and some herbs.

Fill and wrap the pasties and then bake them for delicious golden half-moon pasties that taste absolutely delicious. You can serve them as they are or pair them with dips of your choice.

Here is another great English bacon recipe for you. Amp up your plain ol’ lentil soup by adding some bacon to it. All you need is some onions, carrots, bacon, and red lentils. Add some herbs and spices to add flavor.

Boil it all together and top it with more fried and crisp bacon. This lentil and bacon soup is delicious and nutritious, and you can easily make it.

5. Boiled Bacon With Cabbage and Carrots

Boiled bacon with cabbage and carrots is heartwarming and quite simple to make if you ask me. Boil your bacon with onions, herbs, carrots, and cabbage.

Once all ready, plate and top this preparation with a creamy sauce made with cream, mustard, and parsley. This delicious might not be your first choice for breakfast, but it can be a hearty lunch or dinner.

Now let’s see some recipes you can make using American bacon. I’ll tell you delicious and easy ones that you can easily whip up!

2. Corn Salad With Bacon and Honey

Let’s make a salad using some bacon, corn, and honey. I am talking about corn salad with bacon and honey. The recipe is pretty basic to put together.

Just cook some bacon and add shallots, thyme, corn, and herbs to the same pan. Add this cooked salad to a bowl and drizzle honey when these are all cooked. It’s ready!

Bacon gravy is a rich and flavorful gravy that you serve with fried bacon and biscuits. You can make it with the leftover bacon grease after you have fried your bacon.

To make the gravy, just fry your bacon and add some flour and milk to the leftover grease. Serve this hot gravy with your eggs, bacon, and biscuits for an extra delicious breakfast.

Let me tell you the simplest way to enjoy your bacon. Make a delicious bacon sandwich. Just fry some bacon and toast some bread.

Then, all you need to do is slather some mayonnaise on the bread and top it with bacon, tomato slices, and lettuce. Add the other slice and your bacon sandwich is ready!

The sweet and sour dressing is made with mayonnaise, vinegar, cream, honey, salt, and pepper. You’ll love this amazing creamy salad.

English Bacon Vs. American Bacon | Which One Is More Versatile?

American bacon and English bacon differ basically on the cut of meat, which makes a lot of difference. English bacon is more meaty and chewy. It is also leaner. Hence you can add it to many recipes that call for leaner meats.

American bacon is more fatty and oils. You can fry it up and add it to many recipes, but you can’t use it when you need lean meats. It can only be incorporated when you can use fatty meats. This makes English bacon a bit more versatile than American bacon.

Can We Substitute English Bacon For American Bacon?

The short answer would be no. You cannot substitute English bacon for American bacon. The primary reason is taste. People love American bacon for its fatty and smoky taste.

English bacon, even though cured, is not smoked. It is also thicker and has a meaty taste. People accustomed to the taste of American bacon might compare the taste of English bacon to deli meat; thus, they cannot be used instead of one another.

English Bacon Vs. American Bacon | Which One Is Better?

This might be a matter of preference but people love bacon because it doesn’t taste like ‘regular’ meat. It has its own distinct taste and people love it for that.

So this was our take on English bacon vs. American bacon. Did you like this post? Do you agree with us? Tell us all about it in the comments. I’ll see you next time with another article. Until then, happy reading!

What is American bacon called in Europe?

American bacon strips are called streaky rashers in Europe. That’s because bacon is called rashers there.

Is English bacon as fatty as American bacon?