Dutch Bros, also known by the name Dutch Bros Coffee, is one of the most renowned coffee chains all across the United States. For the upcoming holiday season, Dutch Bros. has launched a fantastic range of options on their menu, all of which will be explored in this article! 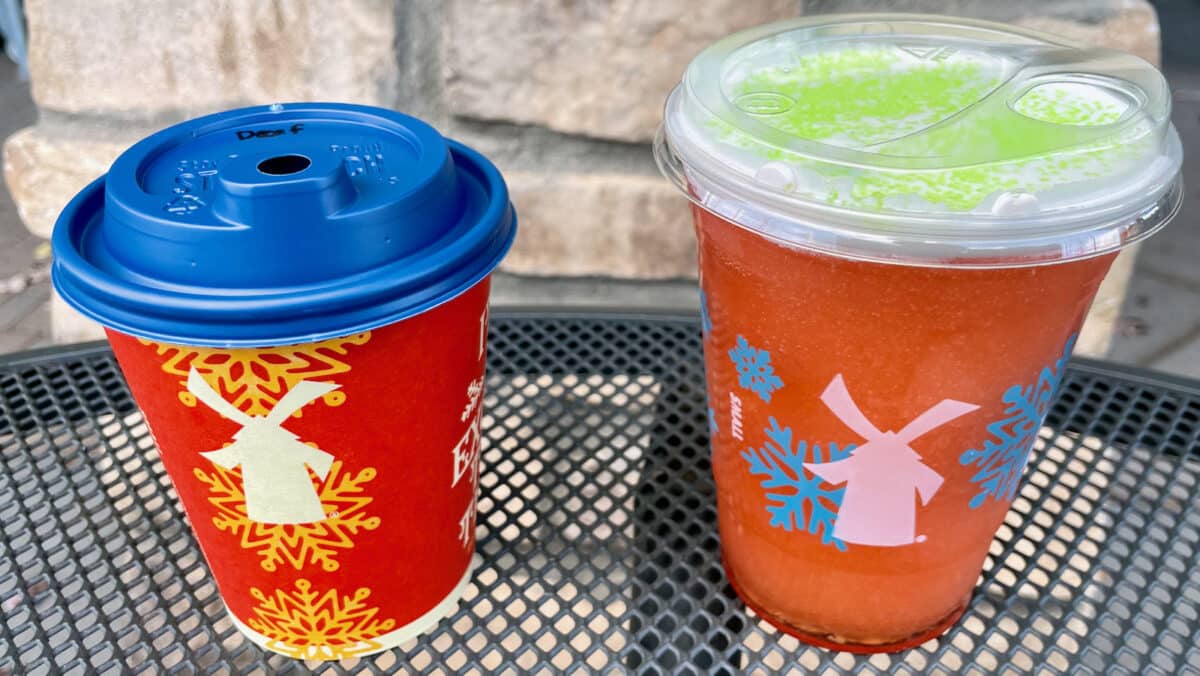 Here, before we begin exploring the Dutch Bros. holiday menu, I would like to mention that this article only has information about the new menu items. The prices haven’t been listed here. You can, however, take a look at the Dutch Bros. Menu with Prices, to know all about their menu prices!

The menu at Dutch Bros. is really massive, with options including coffee, chai, hot cocoa, freezes, blended beverages and so much more! Keeping all the variety in mind, Dutch Bros. has launched a special holiday menu, just in time for Christmas. The holiday menu features both hot and cold beverages, all revolving around Christmas flavors!

Also, although the prices haven’t been mentioned here, on an average, you can expect a beverage from Dutch Bros. to cost you somewhere around $ 1 – $ 5.75. This also depends on the size of the beverage and the number of add ons. However, these prices may vary from one location to another.

In this article, we will explore all about the newly launched holiday menu from Dutch Bros and what exactly goes about in all the beverages. Some of the beverages also have variations within them, which have also been discussed here. Now, let’s explore all of this!

Dutch Bros is one stop for every beverage need that you may have. This coffee chain serves an array of different beverages and also some really delicious baked goodies! Moreover, just like many other restaurant chains across the world, Dutch Bros is one of those places that has specials for each holiday.

So, they usually end up releasing a special menu for certain holidays, like Halloween and yes, Christmas! Now the newly launched menu does not necessarily have only coffee on it, but a number of other beverages as well, both hot and cold.

So. regardless of whether you are on the East or the West coast during the holiday season, Dutch Bros has something for everyone to enjoy! The holiday menu does not necessarily have beverages that look like Christmas.

But, the flavors are indeed exactly what you would expect the holiday season to be like! Now, let us take a look at all of these beverages in detail!

Candy cane is one of the most popular candies that people enjoy during Christmas. It’s almost mandatory for a lot of people to enjoy this one treat in particular and well, everything flavored around it!

Well, you may have tried a lot of cold brews before, but nothing is like this candy cane cold brew from Dutch Bros! This beverage truly defines Christmas, by combining classics like coffee and peppermint flavor.

This holiday special basically consists of a peppermint mocha, which is topped with a soft top and a bunch of candy cane sprinkles! The beverage is available in both toasted and iced forms.

Is it even winter or the holiday season if there is no hot cocoa involved? This hot beverage is a staple during this season and hence, there was no way it wouldn’t be a part of the Dutch Bros holiday menu!

Now, I bet simply the combination of a hot cocoa with candy cane must be sounding absolutely delicious! Well, the hunch from your imagination and taste buds is actually correct, as this beverage is truly a marvel!

The Candy cane cocoa from Dutch Bros is hot and steaming, consisting of peppermint mixed with chocolate milk. Finally, topped with a cold serving of soft top and yes, the necessary candy cane sprinkles as well!

Now we all know that in some places in the country, there is no such thing as a cold winter. So, people here would rightly want to indulge in a cold beverage even around the holiday season. Well, the good news is that Dutch Bros has the perfect treats for everyone!

If holiday flavors are what you are looking for but would rather pick a cold beverage, then the candy cane freeze from Dutch Bros is surely worth a try! This blended beverage has the perfect combination of coffee and well, ice!

Oh, and not to forget, all the holiday flavors with the candy cane and peppermint! This freeze has a blended coffee with some peppermint extract, finished with soft top and the ever important candy cane sprinkles!

Now this one might not necessarily take you down the holiday time route, but is this beverage refreshing or what! The Holly Jolly Rebel is a new addition on their menu and is also a part of the ‘Rebel Energy Drinks’ section.

This beverage  might not necessarily be something that you would associate with the flavors of Christmas. But, that being said, there is no doubt that this refreshing drink is totally worth a try around the holiday season!

The Holly Jolly Rebel consists of pomegranate and vanilla flavors blended with their Rebel energy drink and finally, topped with soft top and some green sprinkles. This beverage is available in both iced and blended forms.

Hazelnut flavored coffee, all in all, is just a revelation, we can all agree to that! There is something about the nutty taste mixed perfectly with the coffee beans, that makes this particular combination irresistible.

Honestly, there is no better time to enjoy a warm and fuzzy hazelnut flavored beverage than the holiday season! The blend of mocha, hazelnut syrup and yes, the chocolate too, make this beverage really winter-friendly!

This beverage starts off with a perfectly made hazelnut truffle mocha, with also some added hazelnut syrup to it! Finally, to make it even more decadent, the mocha has a soft top and also a caramel drizzle to finish it, available in iced and hot versions.

As soon as it is time for winter and fall, we do see a lot of spices being added to most food and even beverages. Spices give you a cozy feeling that does feel great, especially when it’s really cold out there!

Now, if that is the case, how could Dutch Bros not add something to their menu that revolves around spice?! Yes, this sugar n spice oat milk latte is exactly what it sounds like, which means, a great blend of sweetness, with just the right amount of spice.

Have you already guessed the spice that makes this beautiful beverage what it is? Yes, it is indeed cinnamon! This beverage, available in both hot and iced variations, is made with a blend of winter spices as well, along with the cinnamon!

Anyone who is a regular at Dutch Bros would surely know about one of their classics, Sweater Weather Chai! This beverage has won a lot of hearts all around and for the holiday season, Dutch Bros is taking this classic to a whole new level!

Enter, sweater weather chai white coffee. This beverage is available in hot and iced forms and has decadent white chocolate added to it, along with a double shot of white coffee as well!

Yes, it isn’t their classic sweater weather chai if there are no spices to finish the beverage off! The chai is finally topped with a soft top, a dash of cinnamon and finally, some nutmeg sprinkles to finish it off!

Well, you already know about the decadent hazelnut mocha that Dutch Bros has added to their menu. But, the holiday treats when it comes to this particular flavor surely don’t end there!

As I mentioned before, if iced beverages are what you prefer, even when it’s cold out there (no one is judging!) then, Dutch Bros has all the perfect options for you. This blended beverage is a sweeter and chunkier version of their regular hazelnut mocha.

The flavors of the coffee with the hazelnut work perfectly well together. This beverage also features hazelnut syrup, a soft top and yes, the sweet and malty caramel drizzle to finish it!

How To Order Online From The Dutch Bros Holiday Menu

The holiday season is a time which involves a lot of shopping and much more. So, coffee and beverage breaks are necessary to refuel ourselves. However, not everyone would be particularly interested in visiting a Dutch Bros. location, to enjoy something from their holiday menu, I am sure.

Well, there is no need to worry in that case as these beverages can also be enjoyed right at home! To order yourself anything from the Dutch Bros holiday menu, you can place your order via their official website, or even their android and iOS apps.

You can also place your order via delivery platforms like UberEats, Doordash, GrubHub, Seamless and Postmates, in case that seems easier!

For the upcoming holiday season, Dutch Bros. has introduced an array of new beverages, all that revolve around Christmas! These beverages mostly consist of flavors that will really make you feel like there is no better way to enjoy this season!

These beverages will all be available at Dutch Bros locations for a limited time and can also be ordered online! Happy Holidays everyone!

Will these beverages be available all through the holiday season?

Will the holiday menu be available at all Dutch Bros locations across the country?

Yes, the holiday menu will be available at all Dutch Bros locations across the country.

On an average how much does a beverage from Dutch Bros cost?

On an average, you can expect a beverage from Dutch Bros to cost somewhere between $ 1 – $ 5.75, depending on the size and customizations.

Will the regular menu still be there at Dutch Bros during the holiday season?

Yes, the regular menu from Dutch Bros will still be available during the holiday season.

Can the beverages from the holiday menu be ordered in?

Yes, the beverages from the Dutch Bros holiday menu can be ordered in, via their official website, apps, or even delivery platforms like UberEats, Doordash, Grubhub and Postmates.

Will the prices of all the beverages be the same at all Dutch Bros. locations?

No, there are chances that the prices of the beverages from the holiday menu at Dutch Bros may differ from one location to another.