Dutch Bros. coffee is one of the most famous coffee houses in the United States. They are known for selling a large variety of drinks, which are not just about coffee! This year for Halloween, Dutch Bros. has launched some delicious drinks that are surely worth trying out. So, in this article, let us explore the Dutch Bros. Halloween Menu! 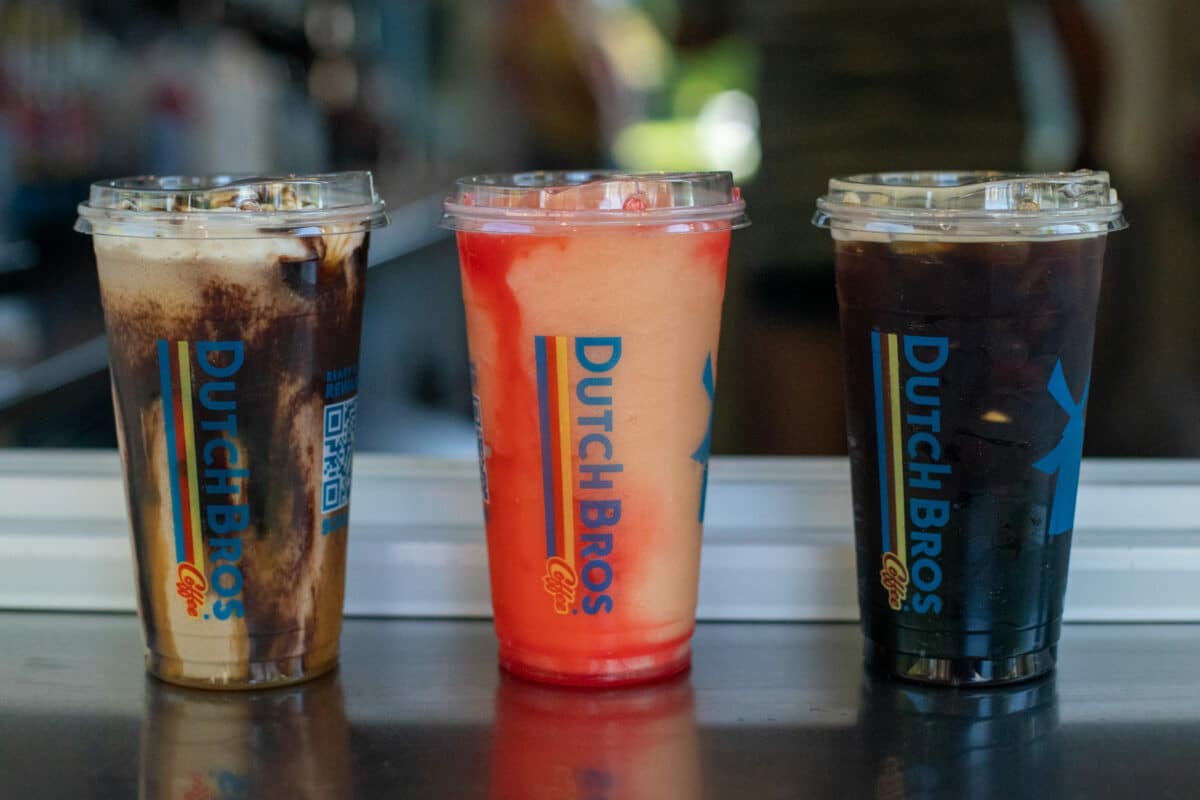 I would like to mention here that before we begin exploring the Dutch Bros. Halloween menu, Dutch Bros. has only announced the drinks for their Halloween menu, which are, of course, Halloween-themed. The prices of these menu items have not been announced yet, so keep a lookout at this article for the same!

The regular menu at Dutch Bros. is quite massive, with almost every drink like chai, coffees, teas, lemonades, and all that you can possibly ever imagine. So, to keep the Halloween spirit high, Dutch Bros. has launched some deliciously spooky drinks like Vampire Slayer, Unicorn drink, and many more.

The Dutch Bros. chain has already officially launched all the new Halloween-themed drinks on their menu. However, the prices for most of them haven’t been announced yet. But there is no need to worry as the prices will also come around real soon! As soon as they are out, they will be updated here; hence, make sure you keep a lookout at this space.

In this article, you will find all about the newly launched Dutch Bros. Halloween menu drinks and what exactly goes on in them. I have also included information on how you can enjoy these delicious drinks from Dutch Bros. in the comfort of your home. Now, let me tell you just a little bit about this coffee house before we begin exploring the Halloween menu!

Dutch Bros. is an American coffee house chain that is regarded as the largest privately owned chain in the country. This chain is also a drive-through coffee chain, which was founded back in 1992.

The owners decided to put all their dedication and energy into making and serving delicious coffee, which gave rise to this chain. As of now, 300 Dutch Bros. outlets are operational.

Anyone who is a regular at Dutch Bros. will already know that the variety of drinks at this coffee house really never ends! Although it is technically a coffee house, they also serve a variety of teas, chairs, hot drinks, energy drinks, smoothies, and more. Basically, it’s like, if you want a beverage of any kind, Dutch Bros. is the place you need to visit!

This chain, just like many other coffee house chains, also has a secret menu that is actually not really limited to Halloween or any other holiday but is available throughout the year. All you need to do is know how to order them! But let us talk about that some other time!

This chain has also been introducing specials for most holidays over the year, including Halloween. So, the specials that have been launched this year are not particularly spooky when we talk about how they look. But they are truly delicious and do justice to Halloween and Autumn with their amazing flavor combinations!

We will discuss all the newly launched menu items in this section! However, again I would like to mention that the prices have not been announced yet, so you may have to wait for a little to know those. But, if I had to give you a round figure of how much an average drink from Dutch Bros. would cost, it would be somewhere around $ 1- $ 5.75, depending on the size of the drink and also add-ons.

The name of this drink itself sounds so spooky! This Vampire Slayer drink is a part of their ‘Dutch Bros. Rebel Energy Drinks’ section, and it is oh-so refreshing! This drink, although introduced around Halloween, will give you the same refreshment as any summery energy drink would.

This is a blended beverage with the main flavors being Strawberry and pomegranate, blended in with their Rebel energy drink. So, in case you live in a place where it is really hot, and only an energy drink is something that can help you stay cool, try the Vampire Slayer out for sure!

Yet another funky and spooky name for an actually funky and spooky drink! On their official website, Dutch Bros. has specifically mentioned that “No unicorns were harmed in the making of Dutch Bros’ Unicorn Blood Rebel.” So, although you can expect the unexpected, it won’t be as spooky afterall!

This is another one of those refreshing drinks to try out on Halloween, with a comparatively less fruity flavor. This drink consists of strawberry syrup and almond syrup mixed with white chocolate sauce and a Rebel Energy drink. You can also take this to the next level of indulgence by adding some whipped cream on top, which is quite recommended by the Dutch Bros. team.

The cold brews from Dutch Bros. are phenomenal; there is absolutely no doubt about that. But, as it is Halloween, doesn’t that mean that you need to do some sort of justice to pumpkins too? For that, Dutch Bros. has the perfect combination of coffee and pumpkin all in one!

The Caramel Pumpkin Brulee Cold Brew is really not like any other cold brew you may have ever tried. Dutch Bros. mentions that Pumpkin flavor with Dutch Bros. is anything but basic, which they deliver! This drink consists of Cold Brew paired with pumpkin and salted caramel plus cream, topped with Soft Top, pumpkin drizzle & raw sugar sprinkles. It is available in Iced and Toasted forms.

The name of this drink is really confusing, for sure. But the drink is anything but confusing and just plain delicious! This coffee is available in iced and hot variations. Although this drink does not actually have any chai in it, the flavors blended together will surely give you the flavor and warm fuzzy feeling that you get after enjoying chai!

This drink consists of white chocolate with a double shot of white coffee (which in itself sounds so interesting to me!), topped with a soft top, cinnamon, and nutmeg. Although the iced version is great for sure, I would recommend going for the hot version on Halloween to get a truly cozy feeling.

Cold Brews are great for sure, but would you rather stick to a simpler version of iced coffee? That, too, is not just any iced coffee, something with Pumpkin flavor! Then, you need to try out the Caramel Pumpkin Brulee Freeze from Dutch Bros. The taste will be a little lighter when it comes to coffee, as this is not made with a cold brew.

This freeze is a blended drink and probably heaven for anyone who likes iced coffee. It has blended espresso with pumpkin flavor and salted caramel, topped with a soft top, pumpkin drizzle, and raw sugar sprinkles. If a simple cold coffee with some pumpkin flavor is what you are looking for, then this one is surely the perfect fit for you!

For anyone who is not an expert when it comes to coffee, a Breve might sound like a new term. Basically, a breve is a coffee that is much creamier as compared to a latte or even a cappuccino. That is exactly what you can expect out of this Caramel Pumpkin Brulee Breve from Dutch Bros.- complete creamy goodness!

This Caramel Pumpkin Brulee Breve consists of espresso, pumpkin, and salted caramel, topped with a soft top, pumpkin drizzle, and raw sugar. The beverage is available in iced and hot forms. But regardless of whether you pick the iced or the hot form, you can expect a lot of richness out of the cream in this drink!

How To Get Halloween Drinks At Dutch Bros?

On Halloween day, I am sure that not all of you would want to go out to get some coffee. Of course, every place is really crowded, and it can be a pain to get through long queues. So, you might prefer to enjoy some delicious coffee in the comfort of your home. For that, there are some easy ways through which you can enjoy coffee from Dutch Bros.

To order yourself a coffee from Dutch Bros. on Halloween, you can easily place an order online, on their official website, along with their android app or iOS app. What is more is that you can also place your orders via delivery apps like Postmates, Grubhub, UberEats, and DoorDash, if that in any way seems like a more convenient option!

For Halloween this year, Dutch Bros. has launched a range of drinks on its Halloween menu. These drinks, on their regular menu, come under the featured drinks. Although the drinks have been launched now, the Dutch Bros. management has not announced their prices yet, which will be announced really soon.

Has Dutch Bros. introduced a Halloween menu this year?

Yes, Dutch Bros. does have a Halloween menu for this year, with a range of Halloween-themed drinks.

Will the Halloween drinks be available at all Dutch Bros. locations?

Yes, the Halloween menu drinks will be available at all Dutch Bros. locations.

How much do the Halloween menu drinks from Dutch Bros. cost?

Dutch Bros. is yet to announce the prices of the drinks from the Halloween menu.

Will the prices of the drinks from the Halloween menu be the same at every location?

No, there are chances that the prices of the drinks from the Dutch Bros. Halloween menu may differ from one location to another.

How much does a beverage from Dutch Bros. usually cost?

The beverages from Dutch Bros., depending on the size you go for, will cost anywhere between $ 1 to $ 5.75.