After the successful ventures of Youtubers in the food business like MrBeast Burger by MrBeast né Jimmy Donaldson, Sides by Sidemen, and Prime Hydration by Logan Paula and KSI, we have David Dobrik, another YouTuber, with his new pizza parlor cleverly named Doughbrik’s Pizza. 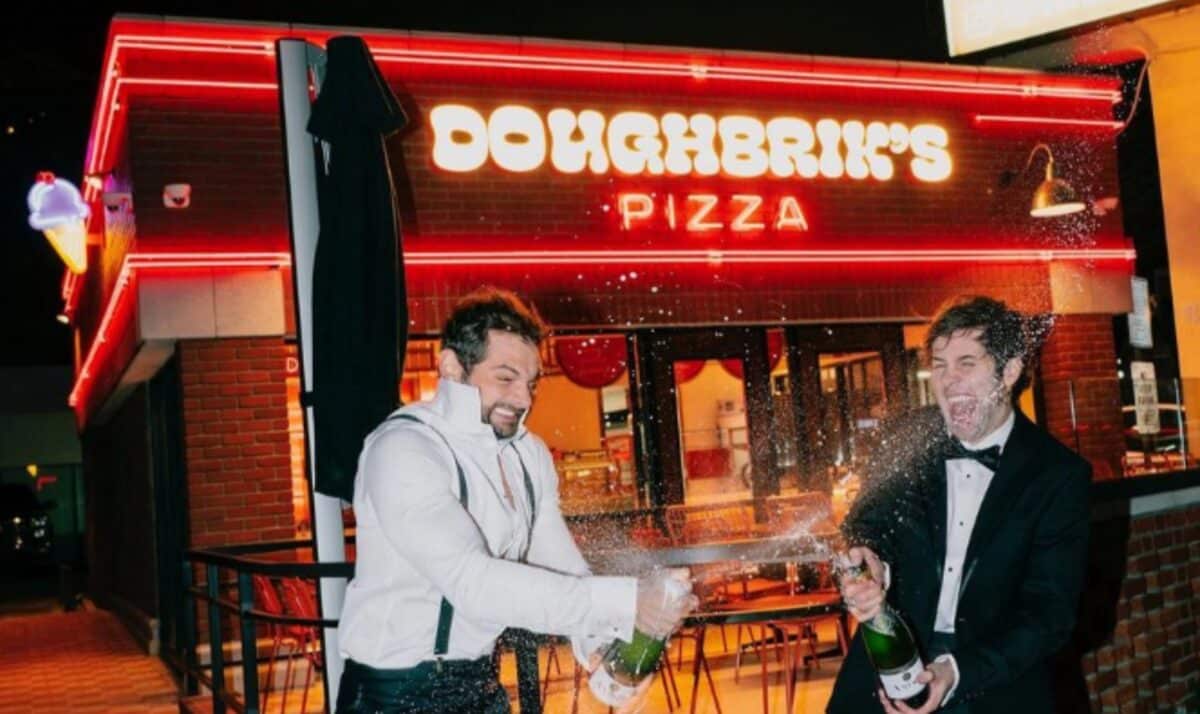 This pizza chain, which was a long time coming, is now up and open on Sunset Boulevard, Los Angeles. Dobrik didn’t start his brand with ghost kitchens. Instead, he opened a physical location, which drew a large crowd on its opening day.

Doughbrik’s Pizza menu is inspired by Chicago-style pizzas and serves doughy and tavern pizzas with several topping choices. It also offers sauces, an option for a side, ice creams, and slushies. You can have a full pizza here from $28 to $30.

Apart from that, there are also many Easter eggs that the founders have prepared, one of them being the Doughbrik Token. Doughbrik’s Pizza has just one location as of now and is also available to order through food delivery apps.

I’ll tell you all you need to know about Doughbrik’s Pizza, its menu, its prices, and other useful information. But before that, let’s see more about how Doughbrik’s Pizza started and became a thing.

David Dobrik lost much of his popularity after 2020 when he was embroiled in some controversies. But he has since been able to put that aside and has been focusing on his business ventures, including Doughbrik’s Pizza.

Dobrik filed for Doughbrik’s Pizza in 2020, and after some hiccups, the pizza place dream was realized in the form of a cozy Chicago-style pizza parlor located between Saddle Ranch Chop House and Carney’s Restaurant in Sunset Blvd., West Hollywood, Los Angeles.

The restaurant is a partnership between David Dobrik, his friend and fellow creator Ilya Fedorovich, and the founders of the LA-based restaurant chain Lemonade.

Dexerto reported that Ilya and Dobrik have taste-tested a lot of pizzas for months to create the Doughbrik’s Pizza menu.

Due to both of their Chicago roots, you’ll find the pizzas fluffy, doughy, and chewy. The menu also includes Blue Moon ice cream, a favorite of Dobrik’s.

The Doughbrik’s Pizza restaurant was inaugurated on 12 November 2022. The opening was met with an overwhelmingly positive response, and sold out all the pizzas on its opening day.

Now that we know a little about Doughbrik’s Pizza, it’s time to see its menu with prices.

The menu of Doughbrik’s Pizza is specially crafted by its founders, David and Ilya. The pizza has 8 topping choices; cheese, pepperoni, meat lovers, Hawaiian, supreme, veggie, spicy vodka, and Chicago.

The pizzas have two base options; doughy and tavern. The doughy pizza offers a more thick, fluffy, and chewy base. Tavern, on the other hand, is delicate hand-tossed thin pizzas.

If people don’t want a full pizza, they can also get a slice of pizza available in all flavors, while the pizza base options might not be available for all.

Other than pizza, Doughbrik’s Pizza also offers garlic breadsticks as a side option. You can also order two sauces, the OG spicy sauce and the spicy vodka sauce, to go with your pizza and breadsticks.

You’ll also find desserts on the menu. You’ll find chocolate, vanilla, and the much-hyped Blue Moon flavor with the option of one or two scoops.

For drinks, you have the option to order a slushy. The flavors available are blue raspberry, cherry, and cola. Now that I have discussed the menu in detail let’s quickly see the menu prices.

Check out the updated Fergburger menu with prices.

What Is Doughbrik’s Token and How To Use It?

Doughbrik’s Pizza has some surprises for its initial customers, and they are fun! One of the surprises is the Doughbrik’s token. But what is it, and how can you use it once you get it? Well, I know.

Doughbrik’s Pizza has introduced round pizza boxes for full pizzas. When you order a full pizza, at the front of the box, you’ll see a golden coin in a small pocket. This is your Doughbrik’s token.

This fun token has two uses. You can take the token to the service window, and you’ll get a scoop of ice cream absolutely free!

The other use is for the party people. You can take the token and insert it in a slot inside the parlor under a sign that reads “Pizza Party.” When you insert the coin, party music plays with colored lights flashing, and you get to have a party for 15 seconds.

Absolute fun both ways! Doughbrik’s tokens are a limited-time offer, so you might want to hurry and grab some before they’re gone!

Note – These hours of operation are temporary as mentioned on the official Instagram page of Doughbrik’s Pizza.

Doughbrik’s Pizza has just opened its first location in Sunset Boulevard and there’s no franchising information available as of yet.

But once there is any information regarding the franchising details of Doughbrik’s Pizza, we’ll fill you in on all the details.