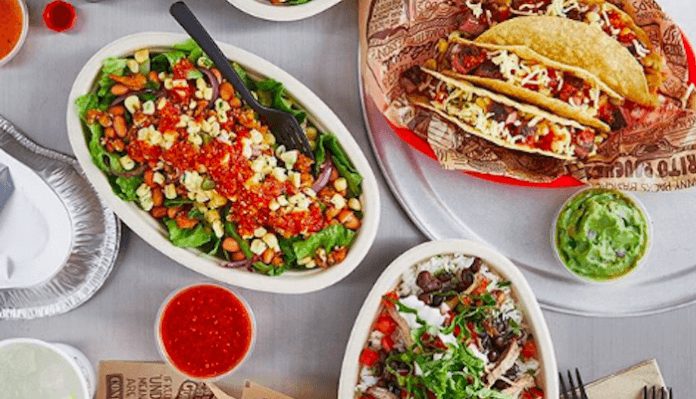 And you know what’s the best part about a secret menu, ordering something from a restaurant that is not on their regular menu. Chipotle’s secret menu is not very difficult to access. All you need to do is to ask for the items like Burritodilla, Quesadilla, Fresh Cilantro or other items present on their secret menu.

A Burritodilla is one of the most famous items on Chipotle’s secret menu. It is basically a quesadilla and a burrito together. It has fillings like carnitas, fajita veggies, and guac that are very common for a burrito but it has cheese-loaded in it.

It has similar to Quesarito but the main difference between a Quesarito and Burritodilla is that Quesarito is very small in size as compared to a Burritiodilla. A Burritiodilla is meant for a large appetite.

Let’s check out the nutrition of Double Wrapped Burrito.

A double-decker taco is a taco inside of a cheese taco. The regular taco is one the top and the bottom portion of the Taco is filled with cheese.

Let’s check out the nutritional breakdown of Double-Decker Taco.

You may think that Nachos is a very common Mexican food item but it is not something that you’ll find on a regular Chipotle menu. But the nachos served in Chipotle’s are tortilla chips topped with the protein, lettuce, beans, sour cream, and salsas of your choice.

So let’s see how many nutritional benefits did Nachos in Chipotle’s secret menu has.

It is one of the most classic dishes that you can order from Chipotle’s secret menu. Quesadilla is a simple two crispy flour tortillas with melted cheese in the middle. You can get a little creative by choosing whatever salsas or beans you want in your Quesadilla.

A Quesarito is a standard burrito that is wrapped inside a quesadilla. Instead of meat, a Quesarito has cheese filled in it. This Chipotle’s secret menu item is not for someone who has a small space in his stomach because it has a bunch of protein-enriched toppings. You can also add additional toppings inside your Quesarito as well.

So let’s check out the nutritional breakdown of the Quesarito.

Some locations of Chipotle serve Taco Salads instead of burrito bowls. The thing that makes Taco Salad so special is a crispy flour tortilla that you eat as well.

If you are not hungry but you are still in a mood of having Tacos, then you order a single Taco in Chipotle, instead of three. A single taco is good for kids that have less appetite.

A Single Taco with beer or margarita is perfect if you are visiting Chipotle with your friends.

So let’s check out the nutrition you can get from a single Taco.

Cilantro is a healthy herd that you can get in the food items of Chipotle for free if you’d ask for it. You can request the herb as a topping on your favorite taco, bowl, burrito, or salad. The Cilantro herb has a lot of nutritional benefits, so let’s check that out.

The 3-Pointer is a special type of burrito that is only filled with only three items. You can choose from any three fillings for your burrito and it costs less than an average burrito.

It is a very simple dish but yet it is loved by everyone who tastes it.

One of the best parts about Chipotle that only a few people know that it offers free extra shells to those who want them on the side when they order a Burrito Bowl.

So if you are in Chipotle and you want to make your own own tacos or burrito, just ask nicely and they will provide you with free taco shells or tortilla shell.

Some people are not happy with the number of fillings that they get in their burrito. But if you are in Chipotle, you can order some extra fillings in all their dishes.

While it may take some bucks, but it’ll take your eating experience to a whole new level. And in my opinion, it’s worth spending some bucks for some extra veggie fillings if you are in Chipotle.

If you are a cheese lover and you feel shy to ask for some extra cheese in any restaurant, then don’t feel the same at Chipotle. In Chipotle, you can order extra cheese with the item that you are ordering.

Yes, you’ve heard it right, you can order some extra cheese with almost everything.

How to Order from Chipotle’s Secret Menu?

Ordering from a secret menu is a very easy task but sometimes, you can’t just go to Chipotle’s store and directly ask an employee about the secret menu. So if you want to order any of the items that I mentioned above from the Chiptole’s secret menu, then this is how you can do it.

But what if, the Chipotle’s employee is not allowed to share the secret menu with you? Then you can use the below-mentioned technique.

2) Just visit a Chipotle’s restaurant and assume that there is no secret menu. Just order any regular item from their regular menu. But while ordering, ask the employee about how much toppings or fillings you can add.

4) But if the employee disagrees with the modifications to the food, then don’t argue with him/her. Because it can be Chipotle’s policy to not share the secret menu information with anyone.

I hope you’ve liked this article and if you have any queries regarding Chipotle’s secret menu, do let me know in the comments section below.