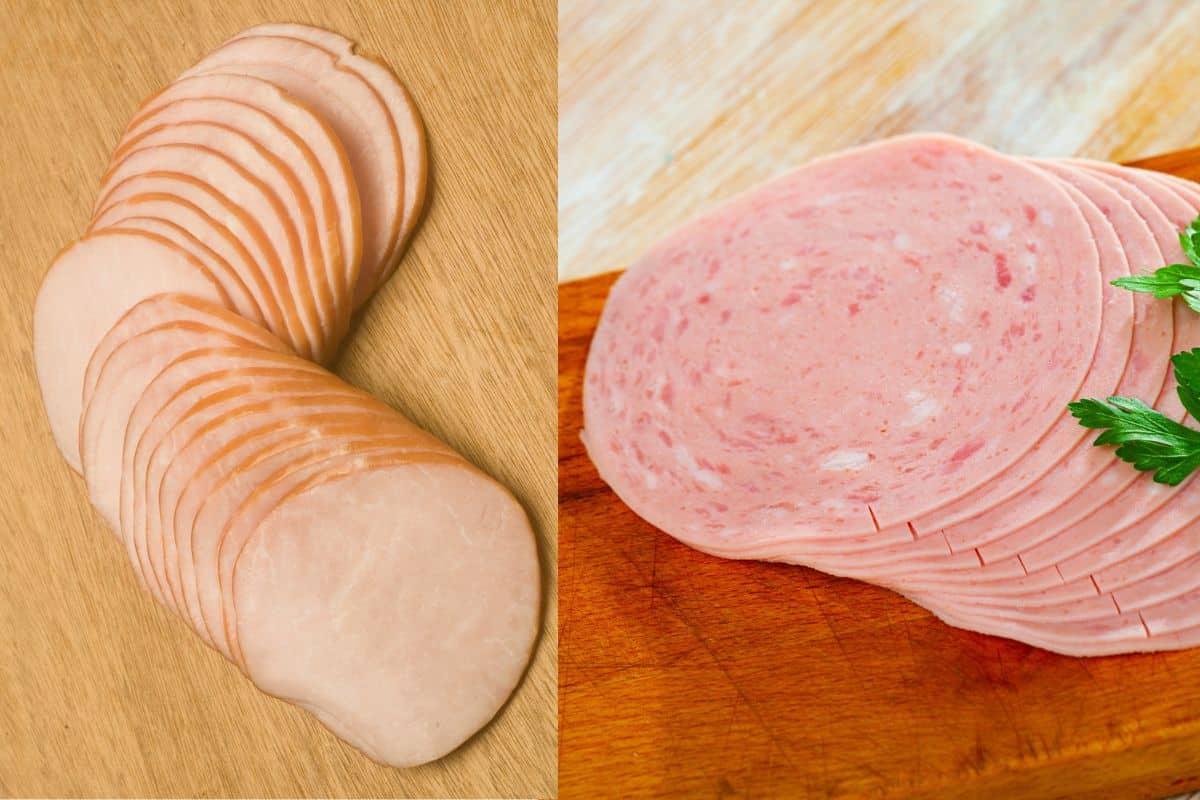 Canadian bacon and ham are meat cuts from the same animal, pigs, but that’s as far as their similarities go. These cured meats are actually very different from each other in terms of taste, texture, and nutritional value.

Although they come from the same animal, their cuts make them distinct in taste and other aspects. Ham is more meaty and fatty, whereas Canadian bacon is lean and soft.

Today, we are going to learn and understand everything about Canadian bacon & ham in depth. By the end of this article, you will be an expert and easily differentiate between both of them.

Let’s dig into “Canadian bacon vs. ham,” but first, let’s see a table and discuss the overall differences.

Who does not like a slice of ham on their bread? It is tasty and easily available. But how is it different from other cured meats? Let us know more about ham.

Ham comes from pork hind legs, specifically from the thighs and rear end. It is a cured meat and has a hint of sweetness as it contains honey or sugar. It is generally cooked and can be served in thin/thick slices or cubes with bread or eggs.

A wide variety of ham is available, from the American-style ham to the ‘Jamon Serrano’ of Spain or the Italian Parma ham. It is best to have ham for lunch or dinner because it is rich in fat and is fulfilling.

Ham has a high-calorie count because it contains sugar or honey and has more fat than Canadian bacon. Generally, it is easy to find ham in the local shops as it is famous worldwide.

What Is Canadian Bacon?

What if I tell you that people in Canada do not call it Canadian bacon; instead, they call it ‘back bacon’ or ‘Peameal bacon.’ Interesting, right?

Canadian bacon comes from the animal’s back part and is served mostly in round slices. It is cured and brined like other bacon types. It is a great protein for breakfast.

Canadian bacon has a soft and juicy texture. It is mostly sold as ready-to-eat discs and has more protein and fewer calories than ham.

Canadian Bacon and ham have only one thing in common: they come from the same animal and look a little similar to each other. Apart from this, they are quite different, which we will discuss as we move forward. Let’s dig into it one by one.

Canadian bacon originated in Canada and is very different from other types of bacon because it is leaner and less fatty.

When we talk about ham, China takes credit for introducing ham back in 4900 BC. Ham gained popularity with the Romans in Eastern Europe when they were trading with China; later on, it was made popular worldwide.

Both Canadian bacon and ham come from the same animal. The only difference is the type of meat cut. Ham is cut from the rear leg of the animal. Thighs and the rear end of the back legs are also favored choices when it comes to ham.

On the other hand, Canadian bacon comes from the animal’s middle back, making it less fatty but softer.

I have already mentioned that Canadian bacon tastes more like ham rather than regular bacon. Despite this, both have very distinct tastes because of the different cut and preparation methods.

Ham has a mainly savory flavor, but it always has a hint of sweetness as sugar or honey is added while it is prepared.

If we talk about Canadian bacon, it tastes more like ham with less or no sweetness. Canadian bacon is juicy and soft compared to ham which is more meaty and chewy.

Canadian bacon is made from pork loin, which makes it leaner, and its texture is closer to a thick slice of ham. As compared to Canadian Bacon, ham has a more fleshy texture.

Both are types of pork, so they have quite similar textures, but the ham has more meat density, whereas Canadian bacon is leaner and softer.

Ham is higher in fats and carbohydrates, whereas Canadian bacon has more protein. Ham contains more sodium but is also rich in vitamin C & calcium.

When it comes to your diet, Canadian bacon should be preferred as it is low in salt and cholesterol, contrary to ham.

The process of preparing Canadian bacon and ham makes them very distinct in taste, texture, and nutrient content.

Ham is traditionally cured or smoked. It can also be brined with maple syrup, but it is mostly prepared with vinegar, honey/sugar, herbs, and spices.

Ham slices can be easily preserved in the refrigerator. To keep them from drying out, one can wrap a paper towel in the bottom of an airtight plastic container. The pre-cooked ham can last for a week.

If we talk about Canadian bacon, it is brined like other kinds of bacon. It is salt-cured and can be smoked or not.

In Canada, it is usually rolled in cornmeal or pea meal after it’s brined. The brine also contains maple syrup and sometimes salt.

Top Recipes To Make With Ham

Here are a few top recipes that you can make with ham. Give a quick read to find out what those are!

Ham sandwiches are a very easy snack that you can easily make. You need bread and some toppings of your choice. Throw in lettuce, onion, and cheese on the bread and cooked ham slices, and you will have a yummy meal.

Sliced ham with roasted vegetables is another easy and healthy ham dish one can have. Vegetables can add more healthiness to your food; if added along with ham, the taste will also enhance.

Select your choice of veggies and stir-fry them along with sliced ham. You can also bake the vegetables and add them to a bowl with the cooked ham, and you will have your bowl of yummy ham with roasted vegetables.

As the name suggests, the Denver omelet is the best ham and egg combination. Roast or stir fry ham with bell pepper and onion.

When it is caramelized then, add beaten eggs to the pan. Cook it for about 5 mins until the top is still wet but not runny. Fold it with the help of a spatula and serve it on a plate.

Hash ham is something that every potato and ham lover will crave. This could be the best option for you if you have any leftover ham.

Even if there is no leftover, you can still make this with ham steaks. Just cook onion and red bell peppers in oil. Add potatoes and cook until it’s crispy. Add diced ham until brown, and serve it with a runny yolk egg on top.

Now let’s see some of the recipe that you can make with delicious Canadian bacon.

Canadian bacon egg cups, as the name suggests, are bacon and egg in muffin cups. Preheat your oven to 350°F. Spray muffin cups with cooking spray.

Fit the Canadian Bacon into the muffin cup. Break an egg on top of it and sprinkle it with freshly shredded cheese. Bake it for 15 mins and serve it hot.

The Hawaiian breakfast omelet is a very delicious breakfast meal. Hawaiian eggs and bacon are the most common combo, and if you love eating pineapple, then this dish is for you.

Just cook your omelet as usual and add bacon on one side. Top the bacon with some cheese and add pineapple over it. Fold the omelet with the help of a spatula. You have a great meal to eat.

Add paprika, onion powder, garlic powder, thyme, cinnamon, salt & pepper and toss the dish to combine. Preheat the oven to 400F and roast the added ingredients for around 45 minutes. Garnish with the chopped scallions.

Hawaiian pizza is another tasteful and exotic pizza that you can make using Canadian bacon. This pizza is delicious and a bit controversial.

If you love pineapple on pizza, then you will love this too. To make Hawaiian Pizza, you must follow the same recipe as a usual pizza. Add Canadian bacon and pineapple in the toppings, and there you have an exotic, delicious pizza.

Canadian Bacon Vs. Ham | Which one is healthier?

We have already discussed the nutritional content of both items. We can easily say that Canadian bacon is healthier than regular ham. Canadian bacon is low in sodium and fat. It even has low carbohydrates as compared to ham.

Also, the protein component is higher in Canadian bacon, making it healthy and more suitable. Ham is rich in vitamin C and calcium but also has a higher calorie count.

I prefer Canadian bacon over ham because of the more nutritional components and less fat & sodium content than ham.

Canadian Bacon Vs. Ham | Which one is tastier?

There is no doubt that ham is more popular as its taste is very meaty and tasty. Due to more fat and salt, it is a treat for your taste buds.

On the other hand, Canadian bacon is low in sodium and is very lean & soft. Both have different tastes as it comes from different parts of the pig.

Undoubtedly, ham tastes better than Canadian bacon because the fatter the meat, the better it tastes.

Canadian Bacon Vs. Ham | Which is more versatile?

Canadian bacon is generally served for breakfast or brunch, whereas ham can be served anytime from breakfast to dinner. The cooking method is quite different.

Canadian bacon can be eaten as it is or cooked in a pan. On the other hand, ham can be fried, baked, or smoked. Several dishes can be made using ham, making it more versatile than Canadian bacon.

Can we substitute Canadian bacon with ham and vice-versa?

As both have different tastes and cooking types, it is best not to switch them. However, Canadian bacon can be used instead of ham in some dishes.

If you want to make your dish a little healthy, then Canadian bacon can substitute for ham as it has a similar taste to ham except for the fats and salts.

Canadian bacon Vs. Ham | Which is better?

After an extensive discussion on Canadian bacon vs. ham, it is much evident that Canadian bacon earns more points in health. However, when it comes to taste, then ham is the clear winner.

People generally prefer food that enhances their taste buds, and ham is very popular and has clearly made its place in everyone’s refrigerator. So, ham is obviously better.

I am sure; as we have come to the end of the discussion, you are now a master of Canadian bacon and ham. What do you prefer between both?

Do you agree that ham is better than Canadian bacon? Tell us in the comment section. We will return with another article; until then, cook some ham.

Is ham tastier than Canadian bacon?

Ham is high in sodium and fat as compared to Canadian bacon. It also has a meaty density which gives a better taste.

What is Canadian bacon called in Canada?

In Canada, it is usually referred to as back bacon.

Is ham fattier than Canadian bacon?

Yes, ham has a higher fat content as it comes from the rear leg of the pig.

Is Canadian bacon similar to other types of bacon?

Canadian bacon is very different from the other types of bacon. It tastes more like ham rather than the usual taste of any bacon.