gET Your cOOKBOOK
1 shares
Jump to Recipe

Let’s face it. Everyone loves some good old greasy bacon! Well, everyone except vegans and vegetarians! But isn’t it unfair that they don’t get a chance to try this delicious treat? Not anymore! You can easily enjoy the taste of bacon even if you don’t eat meat, just with this simple banana peel bacon recipe! 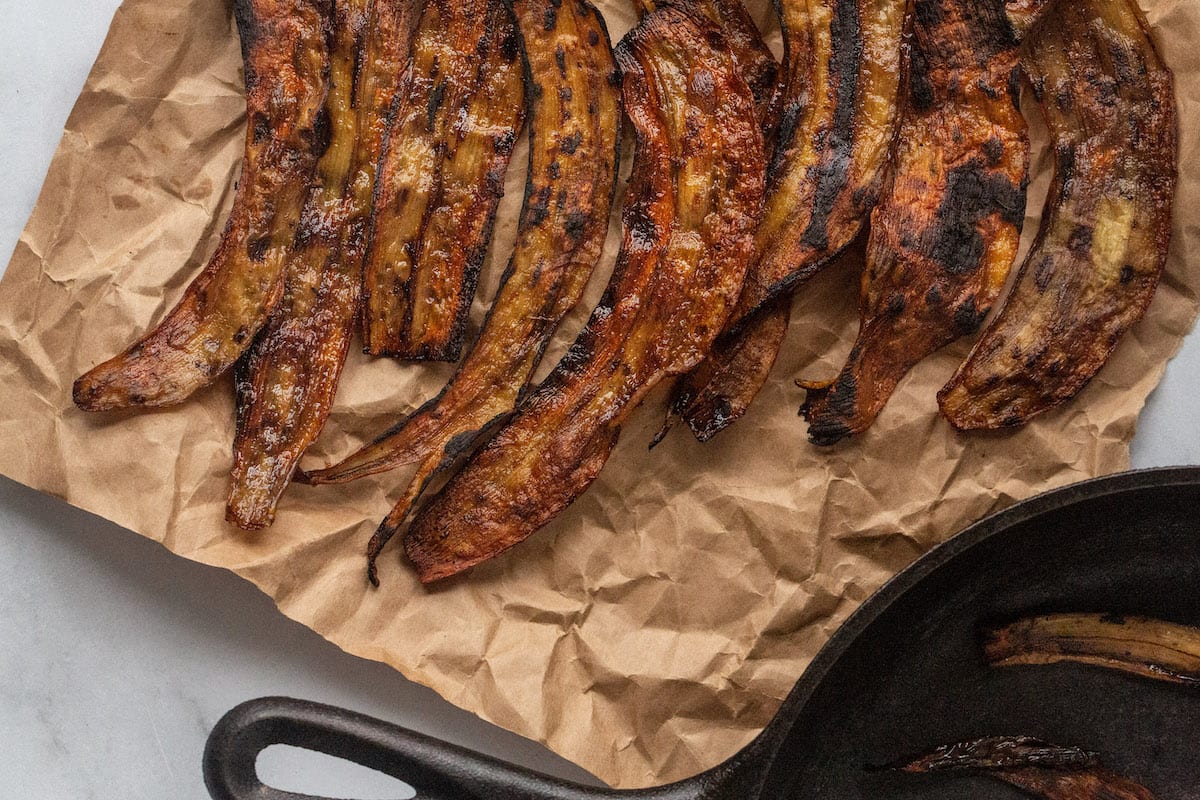 Recently, many trends have been out there that use plant-based ingredients to mimic rich flavors you usually only get from meat. An example is Banana pulled pork, which, well, let’s say, could have been better received by people.

I mean, people went crazy about just how horrible it tasted! Luckily, that will not be the case with this recipe, and I can assure you that! This recipe is tried and tested; unless you tell a meat eater that it isn’t real bacon, they won’t even realize the difference!

The marinade makes the flavors stand out, giving this banana peel bacon a rich and umami flavor. Moreover, it also tends to get just as crispy as regular bacon. So, that, too, is a huge plus with this recipe!

In this article, you will find a guide on making your own banana peel bacon home, from the equipment, ingredients, method, and everything else you need! So, if you have never tried bacon before, don’t waste your time and make this recipe immediately!

What Equipment Will You Need To Make Banana Peel Bacon?

How Much Time Will You Need To Make Banana Peel Bacon?

What Ingredients Will You Need To Make Banana Peel Bacon?

First, you need to take the peels out of the bananas. Then, split the peel from each Banana into four strips and remove any of the white portions that may be stuck on the inside with the help of a spoon. Your peels are ready!

After marinating your peels, prepare your skillet to fry up the bacon. For that, heat some oil in the skillet and keep a plate ready, lined with paper towels. Once the oil is hot enough, add the banana peels and let them fry on each side for 2-3 minutes until they have golden brown specks.

Take them off the pan once done and transfer them to the plate lined with a paper towel. Let the bacon rest for 5 minutes, as it will get crispy during the process. Serve with your favorite sides!

Like regular bacon, there are many ways to enjoy this vegan version. However, some of my favorites are as listed below.

What Will The Banana Peel Bacon Look And Taste Like?

The thing with banana peel bacon is that if you put it out in front of someone that eats real bacon, they won’t be able to tell the difference between the two! This bacon is perfectly golden brown and charred on the outside, which makes it look like a crispy piece of freshly fried bacon.

Regarding the flavor, banana peel bacon tastes very similar to real bacon. The sweetness and umami flavor are quite well balanced. Yes, the banana peel has a slightly sweeter flavor than regular bacon. However, it actually makes it taste even better! This is truly the best thing to complement all your meals! Bacon is something that meat eaters go crazy about. But, it's only fair that vegans and vegetarians try it out too! So, here is a recipe of vegan bacon, made with banana peel. This recipe is really easy and the bacon tastes just like the real deal!
5 from 1 vote
Print Recipe Pin Recipe Save Saved!
Prep Time 10 mins
Cook Time 8 mins
Resting Time 10 mins
Total Time 28 mins
Course Snack
Cuisine American
Servings 8 Strips
Calories 27 kcal

Can the banana peel bacon be made in advance?

It is best to make this bacon before you need it, as storing it too long will eliminate the much-needed crispy texture.

Can any other spices be added to the marinade?

You can add other similar spices to the marinade if you like.

Can Worcestershire sauce be added to this recipe instead of soy sauce?

Yes, you can use Worcestershire sauce instead of soy sauce.

Can the marinade be made in advance?

Yes, you can make the marinade in advance and store it in the refrigerator for a few days.

Is it necessary to use vegetable oil to fry the bacon?

Any oil that does not have a pungent smell or flavor can fry the banana peel bacon.

Crispy, umami, and sweet, this banana peel bacon is the perfect alternative to regular bacon! It is the best way for vegetarians and vegans to enjoy some of that rich, umami flavor that people keep talking about!

The recipe is very simple, and the results are just amazing! Try it for yourself to know exactly what I am talking about. Also, try the experiment where you serve these to a friend and see whether they realize the difference! Happy meatless cooking!