gET Your cOOKBOOK
0 shares
Jump to Recipe Jump to Video

Bacon gravy is made of milk and bacon grease and can be served with biscuits. Today, let’s see how you can make this appetizing gravy at your home. 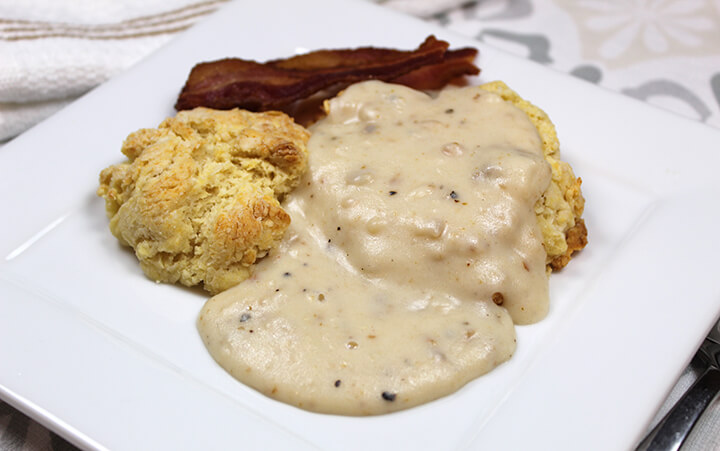 The recipe is very simple and easy to make. You can also use broth instead of milk, but I always prefer to use milk to maintain the flavors of the gravy. The recipe is my favorite dip to have with biscuits during breakfast time. The fat I like to use in the gravy is the bacon grease.

Bacon gravy’s recipe can be made by cooking bacon slices until they turn crispy. Now, add the bacon grease and flour in a skillet to form a roux. Then, add milk and whisk. Simmer for 10 minutes and add salt and pepper. At last, crumble the bacon until the mixture simmers.

Now, let’s see how you can make the gravy at your home. Just follow the steps below and prepare the recipe. Before that, check out the other sauce recipes as well.

1. Black Bean Sauce– Black bean sauce is a Chinese sauce that has a funky and spicy taste. In this post, let’s see how you can make this sauce at your home.

2. Sha Cha Sauce– Sha Cha sauce is a very famous Chinese sauce that is primarily used in many Asian cuisines. This sauce is made of sha cha powder, peanut butter, sugar, milk and vegetable oil combined. The sauce is also known as Chinese BBQ sauce.

3. Vegan Lemon Sauce– The sauce has a tangy flavor that makes boring food exciting. The sauce is best for vegans as most of the dips and sauces make use of dairy products. The recipe is best paired with pasta.

4. Chile Con Queso– Chile con queso is a dipping sauce made with melted cheese and chili. Chile in Spanish means cheese. It is a hot sauce and is not served cold. It is best accompanied by tortilla chips.

I always think when will my mother taught me the Bacon Gravy Recipe? So, I could make breakfast of Sunday without taking any help from my mother but whenever I ask my mother about How To Make Bacon Gravy, she refuses to give me the recipe.
No ratings yet
Print Recipe Pin Recipe Save Saved!
Prep Time 5 mins
Cook Time 5 mins
Total Time 10 mins
Course Dips and Sauces
Cuisine American
Servings 2 people
Calories 206 kcal

I hope you’ve liked this recipe of bacon gravy. Do share your meaningful reviews with us in the comment section. For more recipes like this, stay tuned!