The spookiest time of the year is here! It’s Halloween, and with that comes trick-or-treating, quirky costumes, horror movie marathons, and of course, Halloween pumpkins. 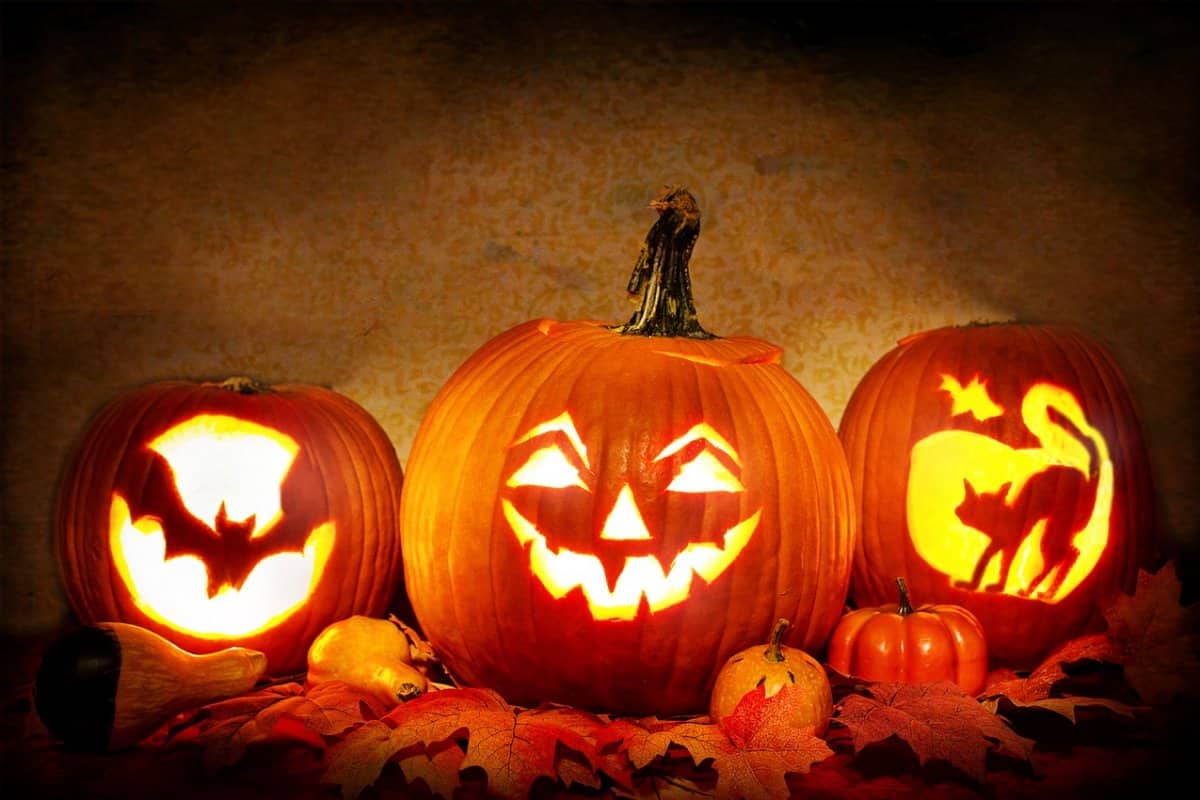 Halloween pumpkins carved with frightening faces with a candle inside are the apt lights for Halloween night. The Halloween pumpkins, also called Jack-O-Lanterns, have been associated with Halloween for so long that it’s a bit foggy how these got so linked together.

The Halloween pumpkins are associated with the story of Stingy Jack, whose soul is said to wander the Earth according to an Irish myth. The Irish used to carve frightening faces in turnips to scare away the soul. This tradition shifted to pumpkins in the U.S.A.

This was just a little snippet of the whole story. Let me tell you all you need to know about the Halloween pumpkin. There’s a lot to tell but let’s start with where it all began, the history of it. Let’s go!

History of Halloween and Pumpkins

Halloween has been celebrated since time immemorial. It began even before the time of the Romans, at the time of the Celtics. The early evidence associate it with a festival called Samhain.

Many say that the beginning of winter was associated with death and decay because all the trees were dying, and it became cold. It was also said that the souls of the dead used to travel to this world during the festival of Samhain.

So people used to light turnips and pumpkins. Thus, Halloween came to be associated with death and hence ghost and ghouls.

The Story Of Stingy Jack and Halloween Pumpkins

Now let me tell you how pumpkins came to be associated with this eve. So this tradition dates back to ancient Ireland and Britain with the myth of Stringy Jack.

When the ten years were over and the Devil returned, Jack made him climb a tree and trapped him on it with some crucifixes. Jack made a deal with the Devil that he could never get into Hell.

But Stingy Jack was nefarious and deceitful. Safe to say, this infuriated God and His angels. So when Stingy Jack died, he was let into Heaven by God.

Turned away by God, he went to the Devil. But the Devil didn’t let him into Hell because of his deal. Thus, his soul was doomed to roam the Earth until eternity with an ember placed in turnip that would be his light.

Thus, to scare away Stingy Jack’s soul, people used to carve frightening faces into turnips, place a candle between them, and keep them outside their houses. These lanterns came to be known as Jack-O-Lanterns or punkies.

When the tradition of Halloween came to the U.S.A., instead of turnips, people started to use pumpkins to make Jack-O-Lanterns. Reason? Pumpkins were native to the land and easier to find than turnips. They were also bigger and easier to carve.

So the Irish turnip carving tradition was borrowed into the pumpkin carving one. As time evolved, the frightening face of the pumpkin is believed to keep away all wandering souls, and that’s how the Halloween pumpkin came to be.

Why Is The Pumpkin A Symbol For Halloween?

The pumpkin became the symbol of Halloween out of sheer chance. As I said, the tradition of Jack-O-Lantern started with hollowing and carving turnips to make frightening and scary faces.

This ancient British and Irish tradition was associated with the story of Jack The Smith, known to the world as Stingy Jack. But when this tradition came to the U.S.A., the turnip was replaced with the pumpkin.

The pumpkin was carved on Halloween to scare the wandering souls away. The tradition was borrowed, modified, and passed down to generations, and that’s how the pumpkin became the symbol of Halloween.

How To Carve A Halloween Pumpkin?

When Should I Carve My Pumpkin For Halloween?

Many people like to start their Halloween decorations early and carve their pumpkins a long time before October 31. So when Halloween comes, the Halloween pumpkins go from decoration to decay.

The best day to carve your pumpkin is a day or two before Halloween. But if you live in traditionally colder climates, you can carve your pumpkin 3 days before the day you decide to celebrate it. Anything more than that will be just trying your luck.

How To Make Your Halloween Pumpkin Last Longer?

A carved pumpkin will stay fresh from three days to fourteen days. This is usually supported by the climate of the place. But if you like to carve your pumpkin a little earlier and don’t want it to look sad on Halloween, I have something for you.

The first step is the most basic one; handle the Halloween pumpkin care. Pick and place it gently. Make sure that it doesn’t fall and bruise. When you care for the pumpkin, it promises more longevity than an uncared one.

Also, avoid touching the pumpkin too much. The reason is that the oils from your fingertips will speed up the pumpkin’s rotting process. Make sure you don’t dig your nails into the pumpkin when you pick it up.

2. Check The Location Where You Are Place The Pumpkin

Many people don’t pay attention but if you want your Halloween pumpkin last longer, make sure it is placed in the right place. Make sure that you place the pumpkin in a dry area away from the sun.

This is because rain and too much sun will only speed up the decaying process we are trying so hard to delay. So pay attention to whether the location of the pumpkin is the right one.

3. Keep Them Fresh And Moisturized

Make sure the pumpkin is fresh. You can do this by bathing it with a solution of bleach and water. Wash it in the solution and let it dry properly. This will make sure your pumpkin stays fresh.

Drying it doesn’t mean you should leave it dry. It shouldn’t have water, but that doesn’t mean that drying it will make it sulk. For that, you need to rub some petroleum on the pumpkin. It will prevent it from drying and becoming worse.

4. Keep The Pests Away From The Pumpkin

This is kind of a no-brainer. A pumpkin, being a vegetable, attracts pests. Make sure you keep all kinds of pests at bay. Keep the squirrels, mice, and ants away. You can place it somewhere away from their reach.

Also, make sure the pumpkin doesn’t have any flesh if carved, so it doesn’t grow any mold. You can trap the fruit flies that will attack your Halloween pumpkin using wine or fly traps.

5. Use A Battery Operated Light Instead Of A Candle

Many people like to go traditional and use candles to make their Jack-O-Lanterns, but I would suggest against it. If you’re trying to make your Halloween pumpkin last longer, use a battery light instead.

The candle will dry up the inside of the pumpkin, which will cause it to lose its luster and make it rot. Using battery-operated lights is a great way to make the pumpkin light up without doing any damage.

What To Do With The Pumpkin After Halloween?

Halloween pumpkins are bred differently from your domestic ones. They are grown in a way that makes them more pleasing to the eyes rather than taste.

Also, you shouldn’t make something with a pumpkin that’s been sitting out for some days and has been bleached and coated with petroleum jelly.

You can save its seeds and flesh when carving it and use them in recipes and for other things. Let me tell you a few things you can do.

So here is everything you need to know about Halloween pumpkins. Did you find the stories interesting? Tell me in the comments what your favorite part of the blog was. I hope you carve a great pumpkin to keep the wandering souls away this year.

Well, this was all from my side. I’ll see you another time with another interesting article. Until then, take care and carve a great pumpkin. Happy Halloween!